Groan - The Divine Right of Kings 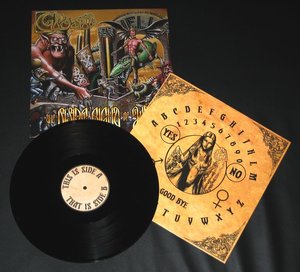 Groan made my day. I was feeling really down in the dumps. My amplifiers got soaked in toxic sludge from the Gowanus canal in Brooklyn during Hurricane Sandy. Never in my life did I think I would intentionally hose down a 50 watt Orange and a 100 watt Marshall but that's what I had to do to get the crud off. After letting them dry out in a storage locker for a week I finally decided to bring them to the music store to see if they could be repaired. I put them in the trunk of my car and went space truckin on the Brooklyn Queens Expressway. For some reason I decided this was the time to give the first of the new Groan album The Divine Right of Kings a spin. I'm very glad I did.

Album opener "Weeping Jesus" showed promise. Starting off with a short but very heavy Black Sabbath Volume 4 influenced jam, eventually the seas part for an creepy Uriah Heepy vocal section. It flows into "Sacrificial Virgin" which continues under the spell of Sabbath filtered through Cathedral. But it's the third song "Magic Man" that really grabbed my attention. No doubt named in tribute the best Heart song, vocalist Mazzereth lets loose a barrage of rabble rousing ramalama that turned my frown into party down. Over a cacophony of hellish feedback he starts screaming about how when the terminal stasis starts to bring you down "you're wise, you're clever. You know how to deal with this bad situation. I'm talkin' about reaching for the Sabbath, the 'DC, the Priest." He goes on to list all the other heavy rock essentials. But when he mentioned reaching for the FOGHAT I really started to burn rubber. Talk about the power of music to soothe a troubled soul. Groan's just lucky that I had to keep both hands on the wheel and couldn't reach for my Grand Funk tapes. But if I did that I wouldn't have heard the rest of their kick ass album.

It's hard to follow up such a pinnacle jam as that, but they make noble attempts on every song. Stained Class is my favorite Judas Priest album and it sounds like it inspired "Atomic Prophets" and "Gods Of Fire." And how can you not love a song called "How Black Was Our Sabbath?" You've read the book written by former Sabbath roadies, now crank the song! Songs like "Dissolution" and "Black Death" bear a strong Candlemass/Cathedral take on heavy doom. "Let's Have A Pint At The Crooked Cock" is a short musical interlude with an excellent immature title. The album wraps up with the incredible 8 minute title track, which throws in everything from church organ, choirs, spooky sing alongs and enough riffs to keep it all glued together.

One of the best things about Groan is that it's obvious they take the music seriously but they don't take themselves too seriously. Too often doom metal is bogged down by rules of conduct. Who the hell wants more rules and clearly defined parameters? Mazzereth isn't afraid to howl and command the band to boogie during instrumental breaks, and they respond enthusiastically. The musical trio of guitarist Dan Wainwright, bassist Leigh Jones and drummer Chris West is supremely tight and can really rock. The production on the album is top notch and the cover art is truly denim jacket worthy.