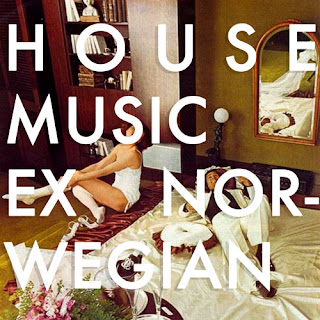 Elections, at heart, are popularity contests.   So are music sales, especially pop music sales.  By definition, "pop" is a genre with a large following; the term "pop" is derived from the word "popular."  It is a crossover of musical styles - jazz, folk, classic rock - with catchy lyrics, vocals and harmonies.   Bands that do it well have fervent followers.  Few bands produce edgy pop music.  However, that is what the band Ex Norwegian does for ten tracks on its new album titled House Music.

House Music is technically Ex Norwegian's third album. The band has a sightly tortured history.  It was founded in 2008 in Miami Beach by Roger Houdaille, disbanded in March 2011, and reincarnated by Houdaille in late 2011 as a four piece band with a mixture of old and new personnel. House Music is the first album release with the new line-up and it is Ex Norwegian's most accessible and, perhaps, best work. Laden with great lyrics, catchy melodies, musical hooks and huge harmonies this is one effort that demands to be noticed.

The album commences with "Ginger Baby" which can aptly be described as Lou Reed meets The Talking Heads. Wonderfully quirky vocals, really an exercise is vocal control, star in "Original Copy". The track "Not A Mouse" has a late 1960's psychedelic folk rock crossover appeal that recalls The Kinks and Captain Beefheart, two bands Ex Norwegian cites as influences.  With "Initiative Rock" the band emulates early British Invasion pop with elegant and upbeat harmonies.

The halfway point on the album is the song "Spin Win It",  a harmonious staccato early rocker.  Ex Norwegian also offers orchestrated rock with "Choice Of Friend" and a Beatle-esque ballad with "Rearrange It." An oddity on the album is "Join The Fray".  It falls somewhere between late 1960's rock style and early 1980's pop excess.  The hardest rocker on the album is "Siesta2Tiesto", which provides more Hoople than Mott the Hoople. The album comes to an end with "Tong As In Pete", an odd guitar riff song with bizarre lyrics.

By the time you read this on The Ripple Effect you may already know who won the U.S. Presidential Election. The President will be chosen by the Electoral College, not the popular vote.  The popular vote goes to Ex Norwegian.