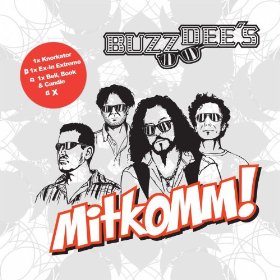 Holy beejeezus!  I don’t understand a word they are saying but I can’t stop listening!

Here’s what I think I know - BUZZ DEE'S is a German rock band led by BUZZ DEE, the guitarist of another band called KNORKATOR.  For BUZZ DEE'S BUZZ DEE enlisted MORGENSTERN, the former drummer of the band IN-EXTREMO; JAGSCHN, the guitarist for BELL, BOOK & CANDLE; and the bassman KNAECKE  (I have no idea why these names are in all caps or why first names are missing.  Mind you, all of this information comes from Google Translate attempts. The only German I ever took was named Hilda. She could carry nine large beer steins - four in each hand.  But, I digress.) The band characterizes its sound as “Alternative-Metal-Country; Elektro-Blues-Pop” and in 2011 released a twelve track album titled Mitkomm! (Despite my best translation efforts I have no idea what that means.)    It is eclectic, acoustic, electric, and the execution is magnificent even if I don’t understand a damn thing they sing.

“Mitkomm“ is also the name of the first track.  It is a catchy metal-influenced hard classic rock tune.  I love the vocals, and soprano additions, and now sing along although I have no idea what is coming out of my mouth (but I do love what is coming in my ears.) “Alles Wunderbar” (which Google Translate translates as “Everything Is Wonderful”) will make you think you are listening to the German version of the Spin Doctors.  Then, “Mein Appetit” (“My Appetite”) transforms the band into a German Cake. What do they sing?  Got me. “Brocken Rocken” (“Chunk Rock”) is just that - an ominous, driving, acoustic rock song with, at least for me, incomprehensible lyrics.  Yet, I found myself “chunkin’” along with it.  An edgy and dramatic synth pop tune, “Scheiss Vampir” (“Fucking Vampire”) follows. I can make out the words “Black Heart, White Skin” largely because those words are sung in English.  Beyond that, you’ve got me.

Half way through the album BUZZ DEE'S pulls out an instrumental walking country blues masterpiece, complete with silly wordless vocal harmonies.  The track is called “Jaja Neenee” (another German phrase that defied my attempts at translation.) This is followed by “Aldi Bier” (based on my research “Aldi” is a German brand name for a complete line of German foodstuffs, so “Aldi Bier” appears to be a reference to beer made by the company.  But, hey what do I know?) The song comes across as an updated Germanic Deep Purple tune.  A softer classic rock effort  is “Waende aus Stahlbeton” (according to the www this translates to “walls of reinforced concrete") that comes across as something the Talking Heads might have performed if the band hailed from Dusseldorf.

When “Meine Zeit” (“My Time”) started I thought I was listening to a different band.  It is a jazzy cruiser of a tune with lush, symphonic organ.  (I haven’t a clue what the vocalist is singing.) “Pech” (which I think translates to “Peach”) has a mid-60’s rock vibe with forcefully sung German lyrics that, to German illiterate me, are totally untranslatable.  The penultimate track on the album is a heavy German rocker titled “Saitenreiter” (I am led to believe this means “string rider” and is a reference to the saddle on a guitar (thank you to the Telecaster.com reader forum for the translation.))  The lyrics?  I have no idea. The album culminates with “Am Ziel” (“On Target”), a hard rock, guitar heavy, alternative sounding effort.  Again, the lyrics are beyond my interpretation skills.

While I’m sure waveriders with German language ability will get even more out of Mitkomm! and BUZZ DEE'S than I do, the band rocks so hard lyrics almost seem optional.  To quote Herbie Hancock, “Music happens to be an art form that transcends language.”