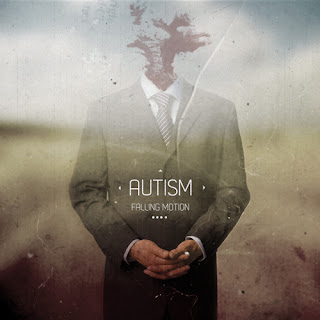 Lithuanian post-rock. Sound familiar? Nope, not to me either. But that’s exactly what we have here, on Autism’s Falling Motion EP. And I must say, for the first post-rock group (actually, at least that I’m aware of, group of ANY genre) I’ve heard from Lithuania, they’ve set the standard pretty damn high.

Opener “Vertigo” is a great showcase of just what Autism can do – it’s got riffs, suspense and tension right from the beginning. What made “Vertigo” really stand out for me though was the way that it manages to be full of suspense and highly atmospheric using no more than the traditional guitar/drums/bass setup. Now, I know you may be thinking - so what? It’s hardly the most unusual assortment of instruments for a post-rock band to use, and believe me, I’m well aware of that fact. But it’s the actual application of them that works so well. The best comparison I can give for this song is that it gave me the same kind of vibes I got from first listening to John Murphy’s “In the House, In a Heartbeat” from the modern zombie classic 28 Days Later. I can’t be totally sure whether or not this was intentional on Autism’s part, but, regardless, both songs ooze such a tense sense of beauty that it really should be brought to your attention. If you like zombie movies, just have a listen to “Vertigo”, trust me, you won’t be disappointed.

I was rather shocked however to find something totally new and unexpected on second track “Bleak Reverie” – keyboards. Now, I’m not in any way complaining about having some ivory tinkling to jazz up my post-rock, not in the slightest, but it did surprise me that Autism hadn’t included any keyboard atmospherics on their opener. And it was then that it really sunk in – these guys know exactly what they’re doing. ”Vertigo” didn’t need the keys to get its message across, so they just didn’t use them. It’s little things like that that really make me respect bands like this. And “Bleak Reverie” itself is yet another interesting song in itself. As the name would imply, it’s a much moodier, bleaker (surprisingly!) affair, with less of an emphasis on riffs to inspire you to run for your life from hordes of the flesh eating undead. Strange as it may sound, to sum this one up in one word, it would be regret. The guitars in particular have an incredibly sorrowful feeling throughout, and I really must commend Autism for being able to achieve what so much post-rock tries to do – capture real, genuine human emotion without the use of human (or any for that matter) vocals. “Bleak Reverie” grew on me a surprising amount with each listen, and given the morose feel to it, that really did come as a shock.

“Crashing Silence” seems to almost straddle its two predecessors in terms of its general feel. It’s noticeably more upbeat and has some nice bits of riffage to spice things up, but it still has a foreboding aura of menace that keeps rearing its ugly head throughout. It feels like it would be a good way to introduce Autism to someone who had no idea what to expect of them – it has the standard Autism themes, but never really devotes itself to either the heaviness or the atmosphere entirely. I found it to be the weakest track on Falling Motion as a result. It may not be a bad song, but it just lacks that one crucial focus present on all the others. A bit of a jack-of-all-trade, if you will.

And so we come to what I feel to be the real standout track on this EP – the aptly titled “Cloudscapes”. As the name would imply, this one’s absolutely gorgeous – synthy background ambience melded perfectly with soaring guitars and the occasional bit of piano just to really fluff things out. Interestingly enough, also the happiest sounding track on show, and, given Autism’s exceptional talent at articulating the more austere emotions, it’s reassuring to hear that they can not only pull off a happy song, but they can also do it with style. I’d almost go as far as to call “Cloudscapes” poppy overall – sure, it’s not going to be on the radio anytime soon, but it can really put a smile on your face. And if one were so inclined, you could probably even dance to it. I’m not one to research that whole aspect of things though, personally.

Closer “When Planets Collide” yet again somewhat threw me with its title. I was expecting epic solos, blastbeats and rumbling bass culminating in some form of guitar/synth standoff. Nah. It’s actually quite laidback, and not even in a boring way! It’s yet again rather upbeat (although nowhere near as much as “Cloudscapes”) but the guitar work is still very much like Autism’s bleaker work. The real standout point of this track though is the development throughout. It’s a lot more progressive than the other tracks in that sense – it starts off energetic, then builds on itself, then we’re treated to a lovely little synth and bass section to calm us down, before the energy comes back again. Interesting enough given that the other tracks all tended to have one key emotion throughout, and then this comes along to stir things up. Much respect for this group, seriously.

And there you have my first experiences with Lithuanian post-rock, and they were pretty damn good. Falling Motion covers pretty much all the bases one would expect from any post-rock band worth their salt, and also managed to get me in the mood for a zombie apocalypse. That, in itself, is a pretty big deal if you ask me.  But for those of you who like their post-rock tinged with just a little extra edge of heaviness, this is definitely one not to miss out on.