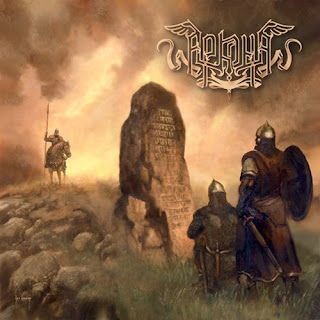 As many of you waveriders know, I'm not the metal guy here.  I leave that to Odin, or Swedebeast or The Pope.  But a while back I fell under the spell of Heidlevolk and their pagan assault of barbarian-tribe battle metal.  Evocative, stunningly beautiful at times but still barbaric in it's own right, it was metal as I'd never heard it before.  Since then, I've always kept an eye and ear open for each submission that came in labeled Pagan Metal, or Folk Metal.  You never know when the next Heidlevolk was gonna drop into my lap.

Lots of Pagan Metal has crossed the Ripple desk since then, but usually these don't make the cut for me because they're more metal than Pagan.  They may evoke a bit of the image or a snippet of the sound, but really, it's just dressed up Metal.

If you have an ear for this kinda thing, you gotta check this album out.   They got the balance right and it's stunning.  Equal parts Euro-pagan folk and equal parts assaulting metal.  Slovo starts off with a neo-classical folk theme "Az" strings and bagpipes and highland drums. By the time the chanting, choral vocals join in, I'm lost.  This is epic, windswept, long-lost music.  I'm on a damp hillside, the waves crashing into the cliffs below me.  Thousand year old stone walls divide the landscape as pagan tribes gather in the valleys.

Then the metal comes in.  "Arkaim" is as brutal as any metal that crosses my desk, but what really makes it stand out is that it never loses the folk touch.  Often times, when the metal kicks in, the folky aspects drop out, and I'm left with just . . . metal.  Not here.  Guttural vocals belch out amongst the blast beats and shredding guitar, but in front of it all are the sweeping keys, the longing strings, the mourning bagpipes.  Choral female vocals bring an angelic, classical atmosphere and I'm lost.  Kilted men march and chant and prepare for battle and I'm in the middle of it all.  And just as the energy builds to an scorching peak, the band switches it up.  Gentle acoustic passages, rousing metal, then a wailing violin, belligerent blasting, then rousing folk undulate and chug over the near 6 minutes of this song like a grand telling of an ancient story.  Absolutely epic metal in the grandest sense of the word.

But what really gets me is that they keep the balance going throughout the whole album.  The folk isn't laced in occasionally as a gimmick, it's a part of each song, and a necessary part.  "Leshiy" starts off with a round of gypsy accordion, which gentle gives way to a chiming guitar. And then another.  Soon a heavy metal tone builds in the background until finally the band launch into a such a perfect grooving metallic riff it'd make Rammstein proud.  Male vocals interlace with the chugging guitar while underneath, the accordion slips back in.  Soon the whole song explodes into what can only be called a true folk-metal jamboree, with keys and drums and instruments I couldn't begin to name all clamoring together to be heard, before it all drops right back down to that killer riff.

That's what I want.  Bring on the folk, wrap in the brutality of metal, but never lose those pagan roots. Grand and visual. Take me away to another time, another place.  Bring me images of warriors and feasts and mead and battles and blood and heroism.  Suck me up into your vortex of lost time and tribes.  Make it real and powerful and beautiful.  And so epic I can visualize an entire Hollywood film with each song.

That's what I want from pagan-folk metal.