Palkoski - Random Antagonist Complex/ The Oblivious Ape(Who Covets Its Own) 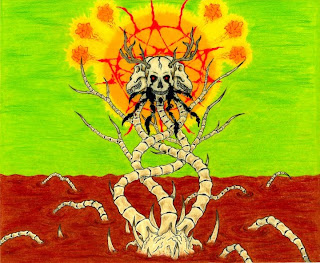 Hmmm...what do you think about this proposition dear reader? Would you dare taking a peek into the mind of a truly deranged person? Even taking a journey through this wrecked soul's inner turmoil? Are you willing to expose yourself to the madness trapped within this sad figure? You are? Fine, just strap yourself down because there is no turning back now....welcome to the insane world of serial killer Frank Palkoski!

Some years ago a band called The Seventh Gate learned about a troubled viscious man named Frank Palkoski and started to write songs about him and his ailments. First it was only the occasional song but eventually a whole album was dedicated to him, Random Antagonist Complex. Shortly after the release The Seventh Gate vanished from the face of the Earth and I can only assume that while writing about Frank Palkoski, the band were completely immersed by him and subsequently murdered and he disappeared....until now.
Out of the blue a band called Palkoski appears with a cd which features Random Antagonist Complex and their own debut album, The Oblivious Ape(Who Covets Its Own). I honestly don't know if it is a re-recording of Random Antagonist Complex or if Palkoski only put their own name on it. Regardless who recorded what, both albums complements each other perfectly where The Oblivious Ape(Who Covets Its Own) is the natural continuation in the story of Frank Palkoski. However I hope the three brave souls in the band - Kerch, Todd and Skip, can stay grounded and withstand the mania of this lunatic now when they brought him back to life.

The musical story about Frank Palkoski, so far, is covered by 41 chapters in this digi-pack, ranging from 7 secs to 8.22mins. And it is a mental rollercoaster if there ever was one. To get the story told in the best possible way the band play a truly unique blend of death metal, grindcore, black metal with a pinch of reggae, psychedelica and spazztic frenzy. And this is the perfect sonic amalgamation to portray a serial killer suffering from multiple personality disorder. By putting all their different musical leanings in a blender and run it at full speed while still being able to maintain a structuralized order, the band brings us horror in its most purest and evil shape.

One second you have Frank pleading to all his different personalities, the next he trashes and lashes out at victims killing them as brutally as possible only to be followed by serene spells and contemplativness. And this goes on non-stop, back and forth, soothing yet disturbing, twisting and writhing and playing havoc on my mind. But I guess it's working more like a catharsis than anything else for me, I mean I haven't turned into a serial killer...yet! How the band can do this without spazzing out and go postal on the world is beyond me.

In all it's maniacal, deranged portrayal of Frank Palkoski, Random Antagonist Complex/The Oblivious Ape(Who Covets Its Own) is a fantastic musical narrative. They manage to reach out and touch all the different emotions a human being possibly can have and show what can happen when they hit you all at once. Full force insanity, violence, love, abandonment, sickness, devotion and despite how weird it may sound, this concoction is so beautiful in all its horror, mania and brutality. Every time I listen to the album I feel like I've been put through the wringer but like I have already mentioned above it's a catharsis for me, a cleansing of my body and soul...and that is awesome!

If you like heavy, skull crushing music verging annihilation Palkoski is the band for you and of course their release Random Antagonist Complex/The Oblivious Ape(Who Covets Its Own) will be a fantastic soundtrack for you. All I can say is amazing and I really love this. But take heed of my warning in the beginning, there won't be any turning back for you once the listening commence. And reports tell me that Frank has claimed yet another victim in the shape of drummer Skip. He has vanished and after a long search and rescue he is still gone. Kerch - vocals, effects and percussion, and Todd - guitar, subsequently brought in Nick. Hopefully the re-shaped trio can withstand Frank....I'm just saying!