Isley Brothers - The Heat Is On 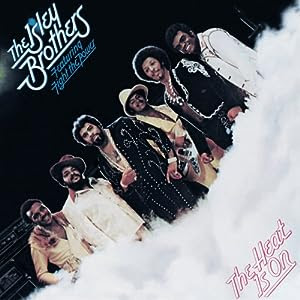 "I try to play my music, they say my music's too loud! I tried talking about it
but got the big run around. And when I rolled with the punches I got knocked on
the ground by all this BULLSHIT going down!"

New Mighty High lyrics you ask? I wish! No, I'm quoting from one of my all time favorite, FAVORITE songs "Fight The Power" by the Isley Brothers, the opening track of their 1975 album The Heat
Is On. Public Enemy borrowed the title and made it a household expression but
old folks in the know appreciated the Isley's reference (and "Hot Pants"
sample). In the all time "monster groove" category, "Fight The Power" is pretty
high on the list. The high hat intro gives you less than 5 seconds of decision
to figure out whether your gonna dance, do some pushups or just start throwing
shit around. Cranking this one in the car is even better. No matter what the
weather, you've gotta roll the windows down and turn the volume UP to make
everyone's day a little better.

So how do they follow up this killer jam? With the title track that's just of
good, of course. Maybe even better! "The Heat Is On" is unbelievably funky.
Starting off with a quick drum intro, the bass line (doubled on keyboards) comes
in and sets the groove that's tighter than a frog's ass. It's six minutes that
go by far too quickly. About halfway through Ernie Isley uncorks one of his most
face melting guitar solos. Jeezus, Ernie is incredible! He also plays drums on
the album, which is very impressive, but it's his guitar work that's so
extraordinary. It's often said that Ernie was taught guitar by Jimi Hendrix when
he was playing with the Isley Brothers in the mid-60's but that's not totally
true. Ernie was 11 years old and watched Jimi play when he was living with them
in Teaneck, NJ but Ernie didn't start playing until he was a teenager and is
self-taught. The Hendrix influence is obvious, but Ernie's style is so
identifiable. He loves using an octavia pedal and, of course, a wah wah to create this insane screech that cuts
all that booming bass. A friend of mine is convinced that Ma Isley told the rest
of the boys to make sure that they let Ernie get at least one long guitar solo
on every album. I choose to believe that, too. He really cuts loose on "Hope You
Feel Better Love," too, the last song on side one. The first half of the song
highlights Ronald Isley's incredible voice and the second half is all Ernie's.

Side One of The Heat Is On was definitely for the rockers and perfect to get any
party started, but side two will help you get the pants off a lady. "For The
Love Of You," "Sensuality" and "Make Me Say It Again Girl" are all nice R&B
ballads with Ernie's guitar playing on a very short leash and cousin Chris
Jasper's keyboards dominating. Ronald's voice is up front and beautifully
supported by brothers Rudolph and O'Kelly. It's a shame this style got so
watered down into the dreaded "quiet storm" that I dread. The CD comes with a
killer live-in-the-studio version of "Fight The Power" that's ferocious.

If you come across a vinyl copy the first thing you'll notice is the brothers
cloaked in A LOT of smoke. Back in the 70's fog machines were unrestricted and
every band had to have a photo showing off how much smoke they had on stage. I
almost bought a copy of Oncer Were Once Vices… by the Doobie Brothers for this
very reason but played it safe and got Deep Purple's Made In Europe instead.
When you open up the gatefold sleeve of The Heat Is On you not only get to learn
what instruments everyone plays but their astrological sign, too. Fun, funky,
kick ass and educational all in one killer diller package. When the Heat Is On
you have no choice but to Fight The Power.

"Fight The Power" live in Aruba