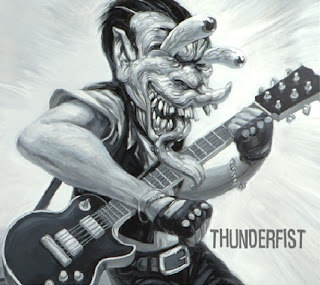 Ok, where to start with this one?!

First off, I gotta say something about that cover.  I mean, come on!  If that ugly beast with the fingerless leather gloves isn't a nuclear explosion of face-erupting rock fury I don't know what is.  It's so awesomely ridiculous that I had no choice.  Must-put-CD-into-player.  Consider that a successful, subversive mission.  Cover art that is so awesome it demands I play the CD.

Now for the music.

Maybe it's because there was the famous mad skin banger back in the glory days of Samson (and Iron Maiden at one point too) named Thunderstick.  And maybe it's because there was a primo NWOBHM band named Fist who released some killer, thrashing metal back in the day.  Maybe its because the obvious combination of these two names would be Thunderfist, that I had all kinds of preconceived notions that what awaited me was gonna be a hell-unleashed fury of NWOBHM-tinged, explosive rock and roll mayhem.  Check.  Consider that another successful, subversive mission.  Name equals music.  Thunder and Fist!

Thunderfist are all that and more.  Raw and primal and full of spit and semen and scorn, the five crazies who compose the band churn out sleaze and slippery, uncut gunmetal rock with unfettered abandon. And damn, do they do it good!

Guitars wail and riff and destroy all land-based creatures in their path.  Drums harken the holocaust.  Bass vibrates the clothing off young women.   And throughout the whole mayhem, Jeremy Cardenas gasps and wails and screams and pulverizes any poor sap in his wake.  This is the unruly spawn of Motorhead in a love-oil fest with AC/DC in the NWOBHM pleasure tent of Motley Crue.  And the Crue reference here is only in the amount of my-own-dick loving sleaze that goes on here, not the music. Because, quite frankly, I'd listen to the real as fuck rock of Thunderfist over the cartoon hijinks of Motley Crue anyday.

Seems the Thunderfist crew have been at it for a while with a couple of other albums to their name, produced by legendary Jack Endino. Which makes sense.  I hear these guys and I think of other Endino creations like Dirty Power.   Pure, unadulterated, primitive rock.   The guys come from Salt Lake City, hardly the bastion of sperm-fest rock, but the boys insure us that none of them are married to their sisters and I suspect their middle-fingers are raised so often up the butts of the ruling Mormon elite that they gotta wear splints to prevent ligament damage.   Seems the boys like nothing more than riding motorcycles, fixing cars and beating the shit outta rednecks, then providing them with drugs.

Yep, that sounds about right.

What we got here are 8 original songs of neanderthal post-NWOBHM metal, and a couple of covers, including "None of Your Business"originally by the Streetwalkin' Cheetahs.  But the boys definitely take that one over, pounding out a primal-punk, metal swear-fest.   As for the original, hold onto your jockstrap coach, cause these misplaced Utah rockers are a terror.  "Cut and Run" is pure Lemmy-is-God, post Motorhead madness with supercharged tempo and mind-crushing riffs.  Man, that chorus is pure gold, with the backing vocals cutting in amongst the blitzing guitars.  A super, rifftastic song.

"Hit the Bottle Again" kicks off with the type of riff that I ate for lunch when the NWOBHM was fresh.  Rolling ascending, then descending runs of guitar madness.   Ride that E for a while then tear into the "All fucked up, all fucked up tonight" hook.  Yes!  Hit the bottle again amid a raging chorus that spits out like a lost treasure from some pre-historic metal album.  "Don't Get it For Free" again screams NWOBHM to me.  Maybe the real Fist this time, or the early killer Def Leppard stuff like "Rocks Off"  You know, back when Leppard used to be a real band.  I don't know.  Everything sounds kinda familiar to me, but all amped up and definitely made their own.  Thunderfist don't sound like anybody but a bunch of guys who love the fuck outta rock n roll.

And they do the whole thing with enough humor to reveal how much fun their having.  They named their record label, ECG Records, for El Chango Grande.  Why you may ask?  Because bandmate Jeremy looks like a big monkey when he performs.  And, yes, El Chango Grande means big monkey.  They keep that humor running through their music with such classics as "Eskimo Pussy is Mighty Cold" with it's soon-to-be legendary refrain "I don't know what I've been told, Eskimo pussy is might cold.  It's cold in here!"

There's not a weak cut here. (except for their cover of Eric Carmen's "That's Rock and Roll" - which in their defense isn't a bad cover, it's just that I'd much rather hear more of their own material).  From the epic doom majesty of "The Wizard's Lament" to the AC/DC Bon's-back-from-the-dead blitz of "As Good as it Gets" this is gunbarrel-shove-the-cattle-prod-up-the-religious-wankers-ass metal done right.

And I can guarantee you this baby will reappear in my Top Ten list for the year.  It's way too much fun not to.