The Ripple 7" Subscription Club - featuring The Havoks, We Are Augustines, Shriekback,

Time for another installment of the 7" Subscription Club, my "warts and all" overview of the stacks of 7" vinyl covering nearly every flat surface in my office.

If you recall,  near me is a cool record store that has a stock of nearly 10,000 45's.  There are huge bins of them, haphazardly placed for the price of 50 cents each.  Tons upon tons of random punk, garage, hardcore, indy.  Maybe some rare metal, some mainstream.  Lots of oldies.  All for 50 cents.


Now I got too many, so gotta listen to em all and clear out space for the next batch.

So this is what I plan to do.  I'm going to invite you, waveriders, to dig with me.  Every so often, I'm gonna grab about 5-7 randomly, put em on and write about what I hear.  We'll decide together if the 7" platter playing is a keeper or a tosser.  Class or crap.  So rather than only writing about the ones I like, this time we're gonna review em all. 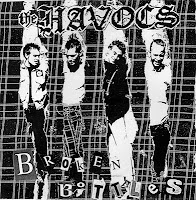 4-song EP on Sound Impressions out of Oregon.  1999.  That probably explains why I bought it.  Portland (PDX) punk is pretty insane and home to one of my favorite punk bands, The Estranged. Toss in some ratty pants and spiky mohawks and it's no wonder I dropped the 50 cents for this one.  So what's it like?   Really fucking good!  Snotty vocals are totally stolen from Johnny Rotten in tone, phrasing, and spittle.  That's ok, at least they're ripping off a classic.  Guitars are clear.  Pace is warp speed.  Each song is good with nary a let up.  Lots of violence and random nonsense. 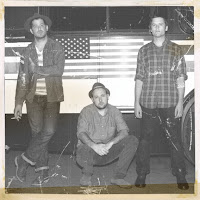 We Are Augustines - Book of James

Don't really know where I got this one.  I don't think I bought it, I think it was handed to me as a free promo 7" at Rasputins in Berkeley, but really who knows.  Three guys on the cover looking like they take themselves way too seriously.  "Book of James" is a eulogy to one of the band members lost brother, which is a commendable endeavor.   And I'm reading tons of reviews and accolades and love about how great this song is and how heartfelt it is and how it's Tom Waits and Bruce Springsteen or what not.  I'm not sure I hear it.  What I hear is kind of a messy collision of the fill-every-second-with-sound, overblown noise of The Waterboys with the "too trendy for words" indie hot thing of Mumford and Sons.  The song wanders and meanders and mandolin pops in (which is nice) but it all flows kinda incoherently without structure or anything to hang onto.  Flipside, "Under a Country Moon" is a pensive rootsy indie number that sounds like Hootie and the Blowfish after they ate some "critics band of the moment" like The Antlers.

There's nothing horrible here, but it all sounds so self-consciously aware and way to trying-to-be-darling. Not my thing. 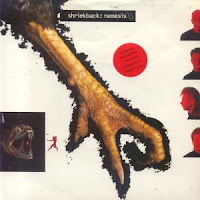 No real surprise here.  I'm a big Shriekback fan.  Have been for years.  I love their dispassionate, experimental, post-punk/funk dance groove.  And besides, Dave Allen is one of the world's coolest bass players in the post-punk world.  So when I stumbled upon this double 7" treat it was a no brainer.  "Nemesis" is classic and vintage Shriekback, and a great intro to the band for anyone unaware.  Big, heavy, dark sound, Barry Andrews cosmically-distant vocals, a huge, singalong chorus, and the whole thing underpinned by Allen's bass work.  "Suck" isn't one of my regular go-to songs by them, but here live, it has new life.  Some of the distracting experimentation replaced by a steadier beat and rhythm.  Live, it sounds like it would've slayed and Dave Allen is slapping and picking like crazy.  Cool surprise.

Bonus 7" - "Mothloop" is another old standard and a classic.  Begins with THAT bass.  Funky and cool as hell.  Version here is definitely sloppier than the ultra-tight studio version, and infused with an I.V. full of Red Bull.  Really kicks.   "Feelers" is another tune (like Suck) that wouldn't normally shine for me in studio version.  A spacey instrumental.  Again, extra energy in the live version and if I was in the audience I'd be dancing like an idiot.

That Shreikback song rules. First time I ever rang a radio station to play a song was for "Malaria".