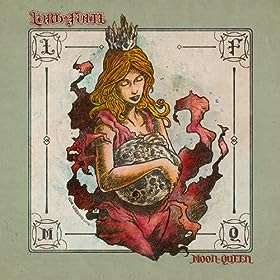 Hey waveriders, call me Headshot. I'll be your pilot for the next few paragraphs.

I'm sitting in a chair on my back porch watching the evening sun bathe itself in somnambular hues of purple and red.  I have a list of albums to listen to, but it's the end of Summer. Autumn air is creeping in through the trees and all the sludge and doom that dominates my list isn't whetting my appetite. I'm in the mood for something fresh, something wide sounding. I start flipping through the list.

I  queue it up. As the first track, also the title track, opens up, the clouds form florescent letters; the name LORD FOWL shines iridescent in the dusking sky. This song has it all: tons of fresh hot riffs, great vocals, and music that is heavy as a really heavy thing, yet mellow and sure of itself.

That first listen was a couple days ago, I've listened to the whole thing several times since then. It's getting stuck in my head, it's catchy and there's nothing wrong with that.

The one thing this album has, above all else, is dynamic. Every song, while sounding like the same band, has its own personality and groove. The band keeps variety at hand.

They go from an easy going mix of "Time Travelin' Blues" era Orange Goblin and KISS on tracks such as "Touch Your Groove" and "Moon Queen" to the almost Foo Fighters colored "The Queen is Not Impressed."

The album ends with the stoned epic, "Pluto." The song is a glorious amalgamation of too many things to mention. One of the greatest moments on the album is the guitar solo in this song. The groove is slow, it takes its time, it's mostly empty air. It lets the guitars breathe. It's absolutely appropriate, and beautiful. It reminds me of the end of H.G. Well's The Time Machine , seeing the purity of a dying planet and the grace of infinite atrophy. Yeah man, space and shit.

Go buy their album, like them on facebook, send them creepy letters about how you want to have their babies, whatever your thing is.

As an aside, here's a little about me, since I'm new. My name, as  you know, is Headshot; I enjoy long walks on zombie infested beaches, feeling the toxic sludge between my toes and, and frolics in ruined urbanscapes.  I meandered my way into the ripple by trying to get my band, Deadweight, heard. We've got a new EP coming out. But, I won't plug you too much just yet. There's plenty of time for that later.