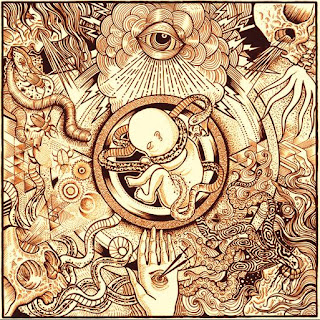 5 years between two releases can be really damaging for a band especially if they are too dependent on ever-changing musical trends. For Baltimore's Chowder that is not a problem at all. Quite the opposite, in fact. They have made great progress from their excellent self-titled EP from 2007 and are simply going from strength to strength. Whereas the great EP was more of a rocking in-yer-face release Passion Rift expands and enhances Chowder's enormous talent and creativeness

The band is a three-piece and consists of Joshua Hart - guitars, synths, mellotron and theremin; Doug Williams - bass guitar, taurus pedals and cello; Chad Rush - drums and they play heavy, doomy,  technical, progressive, dark and instrumental rock. This mixture of styles, their ability to keep the songs well-structured AND rock out at the same time is what makes Chowder such a great band. Playing instrumental music is like walking on a fine line, it doesn't take much to make it sound overindulgent and pretentious. But when done right it is amazing and that is what Chowder are...amazing!

Chowder's creativeness both musically and literary is apparent already in the opener Mysterioid. They immediately embark on the journey through this horror story they have composed. The band use only electronic instruments on this one and that works perfectly in building up the eerie and frightful atmosphere Passion Rift conjurs and all I wait for is for Chtulhu to rise up and wipe me from the face of the Earth.
Next the band kicks into gear with Innsmouth Look, a doomy apocalyptic tune that excellently continues the rise of evil forces from the bottom of the ocean. I get the feel of being on a ship out at sea trying to get away from the horrors that are coming.

And this is how Passion Rift plays out. I'm alone on a vessel racing across a vast ocean from an unseen terror rising from the depths of the waters and it is quickly closing in on me. The songs takes me through all spectres of emotions this terror is putting on me; some are heavy and doomy dealing my anger and resilience against what's facing me; some are slow acoustic pieces depicting solitude and reflectiveness upon the impending doom. Others, like the title track, covers it all.

Chowder has with this album created a fantastic horror novel akin to anything H.P. Lovecraft ever wrote. Why is that? Well as I have already mentioned they take me as a listener through what feels like a perfect horror story. And many parts of their creation has a great Lovecraft-feel to them. After all, the second song, Innsmouth Look, is to me a direct reference to his fictional town called...Innsmouth.

However, I'm straying from the subject though my friends. In order to accomplish an album like Passion Rift you need technical prowess and song writing skills of the highest order. And Chowder have this in abundance. Chad Rush keeps it all together behind his drums and although he makes it sound so easy and simple, he plays some really difficult stuff and upon closer scrutiny he is a beast. Doug Williams backs him up excellently on the bass guitar but is not afraid to step out of the box and venture off on solo excursions and weird cool time signatures. And Josh Hart brings home this narration with amazing guitar playing and extremely well-executed synth work. How he makes it all work I don't know but he sure does a fantastic job!

If more bands could/ would make albums like this you could close down the movie business and discard audio books because Passion Rift surpasses just about any horror movie I have ever seen. And audio books seem redundant to me now. Why have someone read a novel when you can listen to this album and be affected a million times over without words??? People...Passion Rift is an amazing album and you are foolish not to buy it and listen to it and get taken away on the best musical and literary journey you have ever experienced!

Posted by The Ripple Effect at 5:30 AM