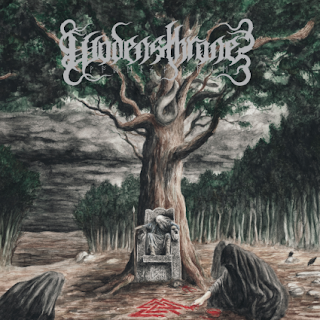 Have to admit that I'm not well-versed in the field of black metal. Of course, the genre was "born" around the time I hit my twenties and I did listen to it somewhat but I was never mesmerized by it. So if I'm not "that into" it why write about Wodensthrone from northern England? Simply because their new album Curse is fantastic!

Wodensthrone have really mastered the art of building atmospheres with their music which is an essential ingredient in black metal but they have managed to push the envelope with Curse. The core of their music is classic black metal e.g. furious buzzsaw-like guitars backed by Armageddon sounding drums. And the vocals are taken straight from the depths of Hell. What makes them stand out is their inclusion of keyboards, clean vocals and folk music. Fret not die hard back metal fans, this is not a weird amalgamation of wimpy music. No Wodensthrone's greatness lies in their sparse but extremely effective use of these three elements. The keyboards are always there but are mainly used for effects throughout the songs and the clean vocals and the folk music parts are exclusively used in the few slower parts Curse presents.

As any black metal album Curse is dark, brooding and angry but this cd is so beautiful in all it's grimness and bleakness. And this is something that further sets Wodensthrone at the top of the black metal community. Their ability to switch so easily between tempos and moods creates atmospheres that gets my imagination going and paints beautiful imagery despite its angriness. Also the band has structured each song perfectly which prevents any tediousness to creep in, something that happens all to easily with any kind of genre. Instead they have a perfect flow to their music which which enhances their music even more.

Another thing Wodensthrone has done that in my mind elevates Curse is the production. I am an advocate of less is more with a lot of things in life but with music I prefer good, big, fat sound. It should at least be done with a band's best knowledge, ability and intentions. The first wave of black metal was extremely minimal when it came to recording and as the style gained in popularity many bands kept it minimal to be true. Many times it sounded crap because of that. Wodensthrone has avoided all that and the production-side of Curse is excellent. You hear every instrument clearly despite the furious and chaotic music and that just makes the atmospheres and visions they create even better.

Whether you have been into black metal for a long time or you want to start out, Wodensthrone's Curse is an album you don't want to miss out on. It's a great album in it's own right regardless what genre you're talking about. This is the first time I have ever heard of the band but they have another full length cd released along with a 7" and two splits that I am definitely going to check up on. Because Curse is magnificent and you're a fool if you don't pick up a copy!