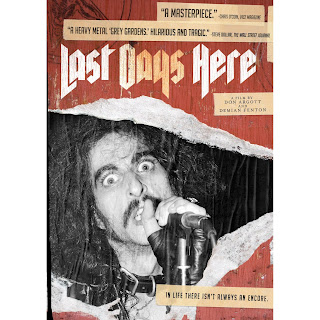 If you have any interest in developing an addiction to crack and/or heroin, please watch this documentary about Pentagram mainman Bobby Liebling. I always knew Bobby was an insane drug addict but I had no idea of the depths of his insanity. Holy shit, this guy is nuts. Last Days Here is an extremely accurate portrayal of his manic lifestyle. Bobby is undoubtedly a talented and visionary musician. It took people decades to appreciate what Pentagram started doing back in 1971 (me included).

In most stories concerning obscure rock bands, the blame is usually dumped on the manager or record company. In the Pentagram story, it's all down to Bobby. He's alienated just about everybody he's ever played music with or tried to help his career. The movie starts with him looking frail, high and insane living in his parents house. Sean “Pellet” Pelletier is a Pentagram fanatic trying to help get his hero's life and career back in order. If there's a heaven, Sean will have a VIP pass. Musicians are a weird breed. There's a weird mix of insecurity and ego that forces someone to perform. Bobby makes Iggy Pop seem like an easy going guy who's a delight to work with. His elderly parents acknowledge that they've enabled their son's poor behavior but refuse to turn their back on him.

The history of Pentagram is long and confusing and some of the anecdotes are priceless. There are some hilarious/pathetic tales told by former member Joe Hasselvander about Bobby turning up so late for a show that he gets there in time for the end of the last song. And then there's the time he OD'd on stage. Still want to be in a band, kids? Murray Krugman, who was involved with Blue Oyster Cult and The Dictators, had big plans for Pentagram but Bobby blows it by mouthing off and ruining their chances. Former drummer Geof O’Keefe's version of that story is heartbreaking.

But for all the doom n gloom of this film, there is a happy ending. Bobby swears on camera to give up drugs and eventually gets clean. His relationship with on and off again girlfriend Hallie results in marriage and a baby. That's where the movie ends. Since the film was completed Bobby has been rewarded with a stable line up and the triumphant return of guitar hero Victor Griffin. Victor's been clean for a long time and he vows to split if Bobby fucks up. Last year they released the solid album Last Rites and I caught the band in NYC and was thrilled at how great Bobby sounded. His voice has not let him down and Victor played incredibly well. I'll get another chance to see Pentagram in September when they headline a festival in Brooklyn that features heavyweight support from Agnostic Front, Negative Approach and Poison Idea. If Bobby manages to stay clean then a sequel to this film would be pretty dull, but that would be fine with me.