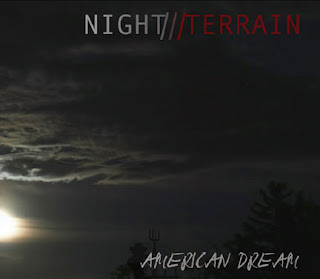 Instrumental music has appealed to me for a long time but I willingly admit it is a forum easy to fail within and get lost in a mess of self-indulgent twaddle. However, when it works it is fantastic. And the latter is the case with Albuquerque's Night Terrain. Their full-length debut American Dream is not 100% intrumental though with drummer Josef Bachmeier singing on the last track Distant Echoes and their utilizing movie and radio samples. That too, by the way, can backfire especially when over-using horror movie samples. Night Terrain, on the other hand, have no such problems whatsoever.

Dyssonic starts it all with a soft voice singing by a campfire courtesy of Bachmeier before the music slowly picks up. Gradually the tempo increases before slowing down only to build up and end in a forceful crescendo. Throughout American Dream that's how the band creates their songs, slow to heavy to trippy to slow to heavy. Of course I could say this part and that part were inspired by such and such but that's beside the point. A band always have their references Night Terrain simply knows how to make great music with that and of course their musicianship.

What keeps me captivated the most is the ebb and flow within each song and how that in turn gets my imagination going. When I close my eyes listening to the album, I'm off on a journey where only music can take me and the destination is everchanging, which is one of the most appealing aspects of instrumental music. I guess my mood though is a big factor in where American Dream is taking me. The lack of lyrics allows the listener to create his or her own visions of what the music is about more easily. Also for me it works so well on any emotional level. It is especially a catharsis for any kind of pent up frustration I might have.

As transcendent as American Dream is, Night Terrain - Josef Bachmeier - drums, vocals; Dave Walsh - guitars; James Bixler - bass guitar, guitars, do love their music heavy. When they leave the slower parts the music simply pounds me down like a sledgehammer only to be mauled by a bulldozer. At the moment it feels like I am suffocation under all the heaviness that's crushing my body, they step back and let me breathe and take off on a healing journey again. And they keep doing that over and over again. Fantastic, simply fantastic!

I can't recall a band utilizing so many movie and radio samples on an album without getting lost in the actual samples. Night Terrain, however, side steps any of the trapdoors this could bring and use their ebb and flow style perfectly with the samples. Check out Beyond Walls, Dusk and the title track American Dream especially and I'll be damned if you don't know what I mean. Like I wrote earlier it would be very easy for me to mention all these bands Night Terrain reminds me off but I won't. Instead if your musical desire is stoner, doom, sludge and space rock you'll miss release at your peril. Because if you don't check them out the Swedebeast might come after you with his battle axe ready! Night Terrain is a great band and American Dream is a great album!