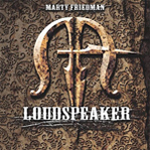 
Prosthetic records is about to re-issue 3 albums recorded by Marty Friedman. Friedman you may recall had a little band called cacophony, as well as another small band called Megadeth. His guitar virtuosity is second to none. The main album I will review here will be Loudspeaker. I picked this stand out gem simply because it's a damn good instrumental album. Plus it features some stellar musicians as well as Marty. Names like Vai, Sheehan, Pettrucci should ring your bell. Yeah this guy has those guys making guest appearances on his tunes.

We all wondered what happened to Marty after his hiatus from Megadeth. He simply dropped off the radar. Turns out he went to Japan and never left. Quite frankly his playing has never sounded better. There is a certain freedom that his life in Japan must afford him. He was no longer in the shadow of his past and he has grasped the future with both hands.

Loudspeaker is my favorite album of all three. But having said that you should know (and maybe you do) , that all of the songs on all three discs are chock full of musical algebraic guitar shredding. Loudspeaker features John Petrucci of Dream Theater on " Black Orchid, Billy Sheehan on Elixir, and of course Steve Vai on the song Viper. Those three songs are above and beyond mere musical compositions. You can feel the freedom and positive energy Friedman is capturing here.

"Devil Take tomorrow " is a classic sounding instrumental that just leaves you breathless. My hope is that Joe Satriani takes this guy out on a tour with G3 at some point. Feel envious of the Japanese who get to hear this guy every day.  Loudspeaker is not your typical shred masturbatory  70 minute guitar scream fest. There are some very interesting passages interwoven between the shredding. I hear so many influences and yes I even hear the signature megadeth sound on "Elixir". But the difference here is that Marty seems to be totally encapsulated in both his ability and his love of the instrument.

Of the album Bad Dna, "Battle Scars" is a killer track. Some of the tunes really push the experimental phase and the keyboards might be better placed further in the mix. But I can find nothing wrong with this release and the direction Marty is going in seems to be unending. " Time to say goodbye" is another classic sounding track.

"Future Addict" was apparently an attempt to introduce those in Japan who never heard of anything he had ever done before. Reworked versions of some major Megadeth songs are o.k. but as a fan of the original I'm not too overly excited. I like that this album also features Vai, and Sheehan. The vocals are not quite the same. But this is a good album. A good intro for those Japanese fans who had no clue. But I feel like stateside this one might not fly as high as Loudspeaker.

Overall this is a 10 horns up scale rating simply because of Loudspeaker. Marty Friedman has left his past behind and is shooting into the future on a full blown shred comet.