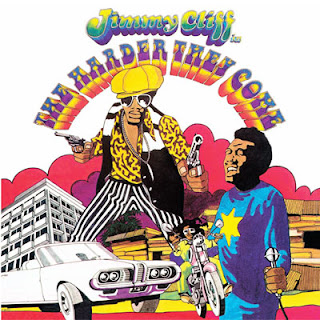 It’s hard to believe one of the most iconic albums of all time is about to turn 40. When this influential album was initially released, very few could comprehend the impact it would have on music fans worldwide. After all, this soundtrack was the album that introduced reggae music to North America. I’m talking about The Harder They Come soundtrack.

Many people erroneously credit Bob Marley for introducing the world to reggae. Although you can technically argue that point, it was actually Jimmy Cliff and the revolutionary music exhibited in the cult classic film The Harder They Come. Upon its initial release, the film became a staple on the midnight movie circuit and introduced a plethora of college students and film buffs to reggae music.

Even though I was about 30 years late to the party, when I first heard the soundtrack and saw the movie I was instantly enthralled with reggae music. Sure I had listened to reggae music by Bob Marley before, but who hasn’t?  Exploring an unfamiliar music genre is an awesome and exhilarating experience, especially when you aren’t already opinionated. Possessing childlike wonderment and fascination is arguably the best thing to utilize when discovering new music. By keeping an open mind, you allow yourself to be enhanced by unusual, unique music without being hindered with preconceived notions.

No one in my family even listened to reggae music before I discovered The Harder They Come and the only time I ever listened to Bob Marley was when he randomly popped on the radio. Nowadays I listen to whatever genre of music I want when I want. Even this whole review randomly popped into my head by pure luck. Whether it was pure coincidence or destiny, everything just lined up perfectly.

One of my favorite current musicians is American reggae rapper Matisyahu. He burst onto the music scene in the mid 2000s with his unique rap style combining beatboxing with reggae music and spawned the Top 30 hit “King Without a Crown.” Matisyahu’s latest album, Spark Seeker is soon to be released on July 17th and I decided to check out some of his current singles. Although I knew he shaved off his trademark beard and locks, I could hardly recognize him when I watched his music video for “Sunshine” (He looks like Chris Martin from Coldplay in the video). Not necessarily due to his physical appearance (well, maybe just a little bit), but his whole sound seemed too mainstream. While talking to fellow Ripple scribe Penfold I admitted that I was “having one of those pretentious and snobbish moments” with Matisyahu’s new sound.

After that comment, it got me thinking about reggae in general. Shortly thereafter I started reading an article discussing Jimmy Cliff’s career in Rolling Stone and it dawned on me to buy tickets to see him perform at the Troubadour. However, tickets were sold out and I refused to pay scalper prices (when I last looked prices were triple the face value).  By pure dumb luck, my CD of The Harder They Come was lying around my desk and I decided to play it. Later that evening, while heading out for a guy’s night, it hit me: How many people are still not familiar with this album and Jimmy Cliff? Luckily for me, this simply sensational album was about to celebrate a special birthday, the BIG 4-0, when I pitched this idea to my editors.

Thanks to Racer X and Pope for their support I’m able to express my enduring love for this mesmerizing, magnificent album. Filled with so many great artists, including recent Rock N’ Roll Hall of Famer Jimmy Cliff, The Harder They Come soundtrack continues to inspire people all around the world. Everyone needs to discover this highly inspirational, influential album.

My first introduction to the album and movie was while watching the 2005 documentary Midnight Movies: From the Margin to the Mainstream, which discussed the origins of midnight movies. Originally, what drew me to this documentary was the filmmakers interviewed, which included John Waters, George Romero, Richard O’ Brien, and David Lynch discussing their iconic cult midnight movies Pink Flamingos, Night of the Living Dead, The Rocky Horror Picture Show and Eraserhead respectively.

However, there were two other filmmakers and films extensively discussed I knew nothing about. The first film was Alejandro Jodorowsky’s El Topo, which was the first real film to succeed primarily on the midnight movie circuit. John Lennon heavily championed El Topo when it first came out, but it bombed during matinee screenings before discovering its audience with midnight screenings. But it was the next film that made arguably the greatest impact on me.

The Harder They Come paved the way in two regards: 1) Solidified there was a viable audience for midnight screenings and 2) Introduced America (and even the world) to reggae. No longer did reggae remain isolated, but became a worldwide phenomenon.  Since then, countless critics agree The Harder They Come soundtrack is among one of the greatest albums, not just soundtracks, ever assembled. It’s consistently, constantly, and collectively found on various All Time Best Albums lists.

What makes this album so remarkable is the sweet, soulful spirit contained within each song. Inside this heartfelt, honest album is an amazing assemblage of great Jamaican songs from the late 1960s and early 1970s. So thank you Perry Henzell (co-writer and director of The Harder They Come) for compiling this masterpiece and for introducing us to amazing artists like Desmond Dekker, The Maytals, The Melodians, Scotty, The Slickers, and of course, Jimmy Cliff.

Besides starring in the movie as Ivanhoe Martin, Jimmy Cliff contributed four of the sensational songs on the soundtrack including “You Can Get It If You Really Want,” “Many Rivers to Cross,” “Sitting in Limbo” and the titular track, “The Harder They Come.” Even though I’m just merely mentioning these songs, not yet critiquing them, each title gives me the biggest smile.  Right now I’m literally singing and humming each song without the music playing in the background. To me, that’s a testament to how impressive each composition is and I’m only mentioning four of the tracks!

The Melodians mesmerize you with “River of Babylon,” which references the Biblical hymn, Psalm 137:1-4. Unlike most popular tunes, this is one of the very few inspired by The Bible and you don’t need a religious background to appreciate it. This is a very relaxing song, which captivates you with great harmonious singers and an easy going beat. “Many Rivers To Cross,” which is one of Jimmy Cliff’s signature songs, follows. Thanks to the organ featured, it creates an almost gospel feel and when the backing vocals start, you could honestly imagine this song performed at both a concert and during a church service.

“Sweet And Dandy” is one of those upbeat sounding songs that you can’t help, but smile when it comes on. The titular track “The Harder They Come” is the sixth track and words can’t properly portray how enchanting this song remains. Jimmy Cliff created one of the greatest songs these ears have ever heard and the world should thank him for composing such a splendid song. The Slickers’ “Johnny Too Bad,” Desmond Dekker’s “007 (Shanty Town),” The Maytals’ “Pressure Drop,” and Jimmy Cliff’s “Sitting In Limbo” are also worth mentioning. The only song I didn’t recommend is Scotty’s “Draw Your Breaks.” I have nothing against it, but compared to the others, “Draw Your Breaks” is my least favorite.

For those skimming the track listing, you might notice there are two versions of “You Can Get It If You Really Want” and “The Harder They Come.” The second “You Can Get It If You Really Want” is almost a karaoke version, which allows fans to sing the majority of the song (from memory) while only the music is played in the background with the exception of the chorus. After a few listens I can almost guarantee you can do it. Often times I will just play this version so I could be “Jimmy Cliff,” even if it’s only for 2:44 minutes. The other version of “The Harder They Come” is a shorter or “radio” version. However, I look at it as a bonus tune to appreciate my favorite track once again. In 2003, the album was re-released with six additional tracks containing additional early reggae songs from the same era (1968 to 1972).

Hopefully, you enjoyed reading this review as much as I did writing it. So go out and discover this amazing album if you haven’t already. Whether you’re already a fan or an aspiring reggae aficionado, please spread the love and support reggae. Jimmy Cliff and everyone else who has promoted reggae I just want to say, THANK YOU!