The Other - The Devil You Know 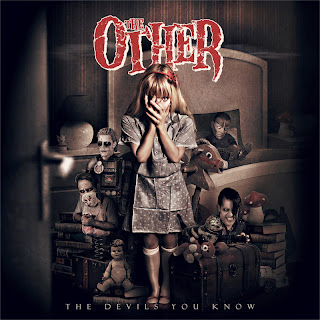 First thing noticed, the song titles are kind of cliché. But The Other make up for it in a horror punk album that delivers the goods. Rod Usher howls as if he is Danzig’s heir to the horror punk throne. His vocals are equals parts punk shouting/singing, and gothabilly wails. Sarge Von Rock drives the band forward in a haze of growling and chugging riffs. Victor Sharpe’s bass locks in with Dr. Caligari’s drumming and both crush along remarkably.


Horror punk isn’t the genre to go to for lyrical finesse, but The Other moved past the usual, “Halloween, we’ll kill you, we’re freaks” subjects of horror punk on some songs, and added a bit more angst, such as in “Skeletons In the Closet.” Speaking of “All the truth will be revealed…leave me alone. All the bones are piling up, and you might be the next in line. Now that you are here, I can’t let you go.” They bring up some always popular anti-religious views such as in “Where’s Your Saviour Now?” “Down on their knees, they beg and they pray to get out of their sins in every way.” Also some hopelessness is brought up on “Puppet On a String” “I can’t explain this pain…..I will never love again. Lose the fight…like a puppet on a string forever tied!”

The more emotional lyrics allow “The Devils You Know” to have a more natural listen to it, other than the usual lackluster forced efforts by others who never stopped listening to “Famous Monsters.” There’s a certain key to the sound of The Other. It’s not merely horror punk; it’s Goth, death rock, rockabilly, and all the overlapping genres in between.

Memorable songs, powerful vocals, punching guitar, gripping drums, everything works in this record. Fantastic effort by The Other. “The Devils You Know” shows that The Other definitely can still throw down better than all the rest ten years into their career.