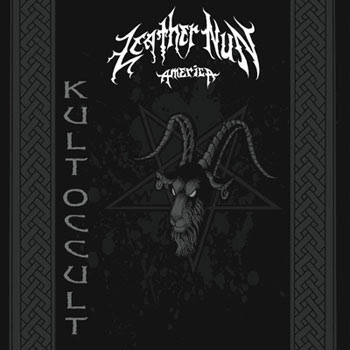 It's getting harder and harder for me to write a review about Leather Nun America.  After pouring my soul into reviews of two of their albums so far, what do I have left to say about their latest long player, Kult Occult?

How about it's even better.  How about the heavy is heavier and the beautiful is beautifuller.  (?)

Let's face it, Doom is a rather limited template.  The framework was established over 40 years ago by Black Sabbath, and it frankly hasn't changed much since then.  Leather Nun America faces this challenge by fully embracing the entiretly of their doom heritage while not being afraid to mix things up a touch.  Drop in a stoner riff here and there.  Mix up the tempos.  Flavor the stew with rock and grunge and metal.  Dribble in some Vitus and Obsessed and Wino.  Create your own magic powder spice.  Stir with a detuned bass.  Flavor to taste.

And as before, the resulting concoction is deadly.  Kult Occult is the work of a band fully at ease with their music, stretching their arms and legs against the frames of their genre barriers, and coming up with new ways to destroy their rock.  "Murderkkult" shows this off beautifully.  Doom is the word here, hard and heavy and plodding and thick, as the song trounces in at a brontosaurs pace.   And the earth feels it, trembling under each massive note.  The dual vocal effect is cool here, as is the ascending guitar riff that flavors the end of the verse.  Then, just as the song may be reaching a point where the plodding pace is becoming too familiar, lightning strikes!  In a second, the riff is transformed, the drums infused with adrenaline.  John Sarnie explodes into a guitar solo that sears the screens of my speakers as it flares out.  Another riff changed, another breakdown.  We're into full-on, fist-pumping stoner/doom/metal/rock/whatever mode here and the song is a corker.  The band drop back down to the opening doom to wrap things up and the whole thing feels about as complete as a messy, satisfying orgasm.

"Indra" has a guitar tone so fat and thick you could melt it down to pave roadsides.  I'm think Wino here in one or all of his variations, but it's all Leather Nun.  As always, they manage to find the groove that grabs the song and pulls it out of doom doldrums.  That groove so obese I could saddle er up and take her out for a ride.  Leather Nun have always done this over the course of their career.  Found that groove.

"Lasting Dose" is an example of the beautiful.  Yeah, Iommi established that template also, adding brilliant acoustic/classical passages to Sabbath albums to create a break from the pounding.   And every band since has found a way to work that thread into their album fabric, but Leather Nun do it better than most.  Sarnie's guitar is just so beautiful and the arrangements of the atmospheric numbers add to the depth of the album, not just serve as a distraction from the heavy.  In fact, I could argue that "Lasting Dose" with it's stark acoustic guitar, gentle hand percussion, and long-effected guitar is just as heavy and just as haunting as the heavy numbers.

Start to finish, Leather Nun America have released one of the best doom/metal albums of the year.  Sarnie is an under-rated Axe master and should be whispered in the hallowed halls of the doom guitar Gods.  Noel Holloway and Mark Markowitz lay down the foundation with precision and abandon.   I hear lots of talk on the internet about bands like Elder and Orchid.  They're great bands.