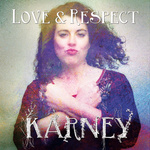 I can’t get it out of my mind.  It is haunting.  The voices, the orchestration, the words.  The music is folk, rock, alternative, indie, psychedelia, acoustic-electric. The lyrics are topical, touching, disconcerting, defiant.  It is high-powered protest music.

The package is so clean and pleasing.  Karney is a San Francisco-band, steeped in railing against the man.  Yet, here the rage is delivered in beautiful harmonies, and catchy hooks, not screams and screeching guitars.

There is a foray into indian mantra-based rock psychedelia, in the song, “Wild Green”. From Karney, the singer/songwriter who fronts the band, it is expected.  This is flower-powered stuff and not the first time she has decried the harsh penalties for pot use and trafficking, as Karney’s website puts it, “.  .  . exacted upon the “happy majority” of adults who choose to use marijuana under today’s draconian drug laws and enforcement policies.”

So there it is - Karney’s ten song album Love & Respect, scheduled for a July 16, 2012 release..According to the hype the release is targeted “to raise exposure for this new album and for Karney as a band, as a brand and as a touring entity.”. Listen.  Then, listen again.  Try a black light with the track  “Wild Green” or a strobe with “Snake Oil Salesman.” Mellow out while you let “Across The Planet” and  “Aurora” swirl in your brain.. Feel finally raised up when “On My Knees” plays to its abrupt end  This album certainly should provide Karney with exposureas it and Karney deserve some “Love & Respect.”