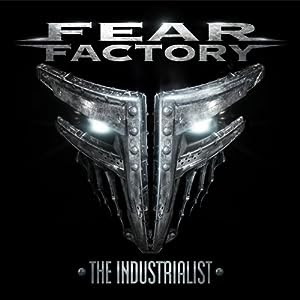 (another Ripple scribe's take on the latest Fear Factory.  You can check out Odin's view here)

With the new Fear Factory release, Burton C. Bell and Dino Cazares continue and further a legacy of tightly crafted and well techno-minded thrash for the masses.

This effort is a conceptual offering that can be easily set in today’s modern quandary.
Starting off with the title track, The Industrialist, it tells of a world where the company owners and robber barons of this world have total control over thought, will, life and death. It is stark and current in content and well done.

New Messiah speaks of new birth to the listener. It isn’t a pretty picture painted yet one of pain and suffering. The future expected is driven into your head with a mix of driving beats, pounding riffs, keyboards and sample noises to color the musical tapestry fully. This is continued into God Eater. A tempo change but no less focused in message and delivery. The samples are picked out well and the atmosphere of this tune is one that speaks of the plight of the masses.

Depraved Mind Murder steps up the Industrial feel with more mechanical sounds that add to the tight rhythm punishment dealt, while Virus of Faith continues this vein of mechanical entwinement with a message of blind faith to the system and death to those who do not assimilate to the new authority.

Track 7 Difference Engine, is a turning in the concept where there is a change in the air and revolt is eminent to the overlord oppressors of the story line. Variance in tempo and timbre are scattered throughout this track. It fits the change in story and the chaos and upheaval found in the reality of change.

Disassemble brings you a straight beat down of the indifference felt and the feeling conveyed of taking a system gone wrong, back to the basics of a beginning.

Track 9, Religion is Flawed Because, begins with some air and atmosphere to the mix, in a 1:52 interlude in the story that leads into the final 9:01 track, Human Augmentation. The vocal processing on this track is itself augmented and is laid over the backdrop of a factory production line in operation.

This is a well conceived release with a polished production and music that is direct and punishing.
I wonder if Bell can deliver the vocals to these songs with the same level of performance as the recording in a live format. I’m sure Dino can punch the guitar riffs with exacting accuracy.

Now, fans of Fear Factory just have to wait for this duo to select a low end section to round out a live ensemble and get dates booked to deliver this person.

This reviewer likes this offering from these Industro-Metal veterans and overall feel this is one of their best releases to date. Lyrical content and production are current to the times but, veiled in a future setting. The samples and sound effects are well chosen and mixed to maximize the songs impact.

If you are a long time fan of FF or, looking to expand your Metal pallet with some variety, pick up this release in digital or, CD format and hear what The Industrialist is all about.