Anyone who mails me a box full of vinyl deserves to get their stuff reviewed. That's exactly what Drug Front Records did and that's what I'm going to do. Drug Front is a Brooklyn based record label run by musician Dean Rispler, current bassist for the new version of The Dictators called Manitoba. Ross The Boss is playing guitar for them, that's all you need to know. Dean's a supporter and documenter of scuzzy bands operating in the New York City area and here's the run down of what was inside the box he spent $3.31 on postage.

Does the expression "saving the best for last" mean that the first is the worst?

First up is the new 7" single from the band Runny titled "The Legendary Runny E.P." For decades I've been described as immature, vulgar, unpleasant and so on but Runny vocalist Lemon Cookie far surpasses me in all of these categories and many other unsavory qualities. He's been fronting Runny since 2005 and shows no signs of growing up in any way, shape or form. This 4 song single is really messed up, and on colored wax to boot. Musically, it's great punk rock. The band is tight with axe riffery from Cupcake and a rocking rhythm section of Cracker Dap on bass and drummer Colonel Cream (those last 2 also play in a great band called The Whores). Lemon Cookie's voice is a hardcore bark reminiscent of Roger Miret's early Agnostic Front work. But the lyrics! Oh my. They're something like if The Mentors were sexually confused and kept a blog diary. Opening song "Sucking On The Wrong Dick" lets you know you're in for a rough couple of minutes. Amazingly, it gets even more depraved with "Way Up Inside." These are songs so nuts you have to hear them to believe it. I had to check if side two's "Punish Me" was a GG Allin cover. It's not. The whole thing wraps up with some sort of techno remix thingy called "All The Living Things You Gave Me Are Dead" that I didn't finish listening to. 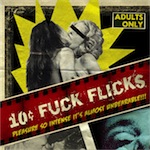 A classy band called the 10 Cent Fuck Flicks also gets the colored 7" single treatment subtitled "8 Songs About Drugs And Sex." This is raw, dirty, fast punk for fans of The Dwarves and The Lazy Cowgirls. The lyrics really are about sex and/or drugs and each song flies by in about 2 minutes. The vinyl comes with a download card with a bonus song that I haven't had a chance to check out yet. I have a good feeling it's more of the same, meaning it kicks ass. The instrumental "Pussy Flavored Ice Cream" seems to borrow a riff from Exciter's killer jam "Feel The Knife." Even if it doesn't, I'm going to pretend it does. I bet these guys put on a raucous show and I hope they play louder than hell. 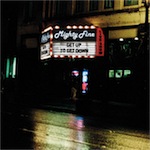 The band Mighty Fine must have more commercial potential since Drug Front released a full length 12" LP called Get Up To Get Down and threw in a CD rather than a download card (side one is Get Up, side two is Get Down). Mighty Fine's another band that's been around for a long time but this is my first real chance hearing them. They're often compared to the Afghan Whigs, a band I really can't stand, but I won't hold that against them. Sure enough, they do sound a lot like them and even have Whigs frontman Greg Dulli guest on one song. Mick Collins of The Dirtbombs also makes a cameo. Mighty Fine definitely bear the influence of both their guest artists but bring enough of their own booze to the party to keep it interesting. Vocals sometimes zoom into Jagger-esque falsetto more than I'd like but otherwise the singer's voice is powerful and the band gives him good punk/soul backing. I accidentally had my turntable on 45 when I put the song "Danger" on and it sounded a lot like Ace Frehley's version of "New York Groove." At regular speed it was more "Superfly." Real cool with me either ways. Limited to 500 vinyl copies, this one mighty actually sell out. 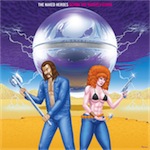 The Naked Heroes have returned with their second album titled Demon The Whiskey Down. The front cover art is great. Dean is a HUGE fan of the band Autograph, I don't know how he was able to afford the guy who did the covers to Sign In Please and That's The Stuff. Doesn't matter, someone in Williamsburg no doubt is already rocking this cover on the back of a too small denim vest. Even better is the awesome comic book included inside the vinyl (CD comes with the wax, too). An honest to goodness 12 page comic book! Great story and illustrations by Benjamin Marra. I wouldn't be surprised if this packaging concept was something Dean forced on the band because of his love of Raging Slab's Assmaster LP/comic. How's the music? Like I mentioned in the review of their debut album 99 Diamond, I was all set not to like this band due to the obvious White Stripes connotations (male singer/guitarist, female drummer) but they're too damn fun to hate on. They have a great sense of humor and wrote a song called "Pickin' Up A Dime." Drug Front royalties must be pretty good because all I can afford these days is a tre bag. They also have a real funny one called "Heavy Metal Shoeshine" that bears absolutely no resemblance to Saxon's "Heavy Metal Thunder." The kids in Greenpoint wouldn't get it and wouldn't like it anyway. The title track is real good, for real. Hope to see these guys live one day in their element but I might need a fake ID to shave a decade or two off my real age.


So there you have it. Four bands all working hard to get their kicks. Dean is to be commended for dumping so much money into this nonsense. Vinyl's expensive and most of this stuff can't be found in stores so feel free to send some of your disposable income his way.