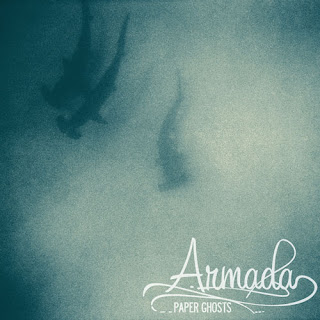 Paper Ghosts is the full-length debut release for this LA indie rock band. Cody Page (lead vocals/guitar), Eddie Core (drums) and Jeremy Gruber (bass/keyboards) make up this trio, and they make it up well, from what I have heard.

When I first hit play, on the free mp3 Badge and Gun, I was immediately struck by how easy the album is to like- it doesn’t throw you any spin-balls, it is indie rock, a basket case, just with some pretty nifty vocals/lyrics (yes, I did just say “nifty.” No. I am not being ironic.)

I then listened to the entire album, because who doesn’t like an easy-to-like album?

Young Man is the song that saved the entire album from instant classification as mediocre. With its jazzy and bluesy feeling, it makes you want to sway your hips as the beautiful vocals carry you through the song.

I like how this album took me from “basket case” to “jazz/blues” to “ohmygod” with thee songs- cue Callanwolde. Going from hip-swaying-jazz to a heavier number without a blink, and so smoothly. The listener won’t be grappling for a hold on the music, because it just seems like it is supposed to have this contrast running through it.

Callanwolde is the heaviest sounding on Paper Ghosts, taking a heavier bass line, a higher pitched periodic guitar, and gluggier vocals. It drags you into its depths, and refuses to “let it go, sit back and let it go.”

Up, Out is my favourite of the ten tracks- it takes the stock indie-rock, gives it the jazz-blue vibe with a smooth as bass line, then adds weight. It is like some sexy, decadent dessert that you know you shouldn’t be having, but is just so good...

Armada has done a brilliant job putting together a stand out “rock” album that pulls in so many different influences to make it something individual and so good to listen to. Jazz, blues, folk, rock rolled into one smooth, sexy album. Honey on my ears.

http://soundcloud.com/mt-press/armada-badge-gun-1
Posted by The Ripple Effect at 12:30 AM