Abrahma - Through the Dusty Path of Our Lives 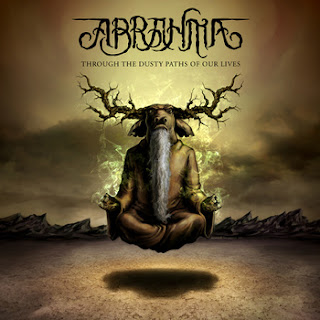 Through The Dusty Paths Of Our Lives, their 70-minute Small Stone Records debut, is something I must experience, not just hear.  Ya dig?  It's...dare I say: epic?  Yes, in every sense of the word.  One may want to set aside some time for his or her first rock-filled trip, which is what I did after hearing the hype, reading the rave reviews and tasting some teaser tracks.

Taking cue from what I can only assume is the image of an obscure god of riff-creation on my cover-of-the-year so far, I sit cross-legged on the floor and place my forearms on my thighs, making the same circles with my index fingers and thumbs.  Inhale.  Exhale.  Try like hell to levitate...but just can't.  Damn gravity.

If the short intro, "Alpha", shows me the way to the light, then I get a sense of dark shadows from next four or five songs.  Pulsing riffs on "Neptune Of Sorrow" are ominous and brooding, leading to a dynamic chorus, and  "Tears Of The Sun" is a muddy, gritty damn boogie-fest.  The grungy, "Dandelion Dust", and southern-tinged, bluesy "Honkin Water Roof" are nasty numbers.

Two more of my highlights are in the middle..  Just after the mystical "Headless Horse" - maybe my number-one song on the whole album - Monster Magnet's Ed Mundell plays a staggering solo on a sinister "Big Black Cloud".  Just the fact that the legendary guitarist would make an appearance on this impressive record should tell you something.  It did to me.

I think "Loa's Awakening (Prelude)" - combined with the "Vodun" trilogy (tracks, 7, 10 and 13) - could have been a decent ep by themselves. Part I, "Samedi's Awakening", makes me think of Pearl Jam's predecessor, Mother Love Bone.  Great vocals and an upbeat funky groove.  Act II, or "I, Zombie", has a rich Deep Purple swagger and the last, "Final Asagwe", has a dark southern swamp edge to it.

"Oceans On Sand..." is cool, a short narrative accompanied by blues guitar, which gives way to a bass-filled expansion of the mind, "...Here Sleep Ghosts."   Tripped-out guitar effects as I begin to wind through "The Maze", one of the most kaleidoscopic heavy-psych tunes I'll hear this year.  I'm sure of it.

Hold on...I think I'm levitating now.  Either that or my ass is going numb.  This a freakin' long album.

Ends with the mind-bending instrumental "Omega", another one of my top picks.  Over six minutes of stomping grooves and psychedelic greatness.  Awesome.

For me, there is an obvious drawback to owning a recording as epic as this one.  It will probably have to be a double-album if I get it on vinyl, which means it will cost quite a bit more than the records I usually buy.  Maybe I should start saving now.