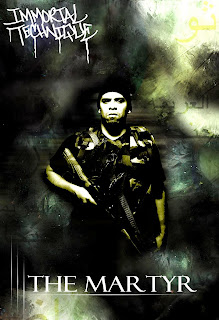 Over the years I’ve discovered a few constants in this life that I’d like to share.  Here’s the list in order: death, taxes, and Immortal Technique.  I know there are a few of you waveriders out there that read that last sentence and either raised your fist in acknowledgement or chuckled and nodded your head.  You know exactly who Immortal Technique is, and why I hold his music in such high regard.  The rest of you pay attention.  Immortal Technique is hands down the most righteously polemical emcee that I have ever heard!

I can remember many years ago when a very good friend of mine was trying to expand my musical horizons.  You see he was, and still is, a dedicated hip-hop head.  At that time I only owned a few hip-hop albums, and my fandom of the genre was still in its infancy.  Hoping to spur the development of my appreciation my friend copied several albums he held in high regard and gave them to me.  Two of those discs happened to be the first two Immortal Technique albums, Revolutionary Vol. 1 and Vol. 2.  When I listened to those albums for the first time, my brain imploded.  This was an emcee spraying intelligent lyrical vitriol rapid-fire at the ills of the world.  He was intense.  He was profane.  He was thought provoking.  With the exception of one song (which to this day I find so disturbing that it ranks among the handful of songs I never wish to hear again in my life) these two albums became permanent fixtures in my listening rotation.

Fast forward to present day.  Immortal Technique released his latest album, The Martyr, for FREE in October of 2011.  How I managed to miss this important fact until late December 2011 is embarrassing to say the least.  During the introductory track of the album Immortal Technique proclaims that it is the responsibility of everyone listening to “…burn this for every single mother f!@#$% you know”.  Well, to put it simply, I don’t have enough time or CD-Rs to obey that command.  Hopefully he’ll understand if I resort to using this platform of mine to spread the word instead.  Fingers crossed.

As I alluded to before, this man does not rap about trivial matters.  The targets of his lyrical fury include poverty, racism, religion, class struggle, and the world’s governments.  He’ll never draw comparisons to anyone you might hear on the radio nowadays.  Well okay, that’s not entirely true.  Immortal Technique has songs about materialism too.  It’s just that his songs make a point of denouncing materialism, not celebrating it.  That’s kind of an important difference.  So how would you like a sample of what I’m talking about?  Here is his second verse from the title track “The Martyr”.

The purpose of life is a life with a purpose / So I’d rather die for a cause than live a life that is worthless / I don’t need the circus or the day of national observance / I need you to think for you and stop being a servant / Pawns only move a square in the game that they’re used in / And realize it too late, like the shootin’ of Huey Newton / Or Patrice Lumumba and Salvador Allende / Slaughtered by the power hungry branches of their own gente / Ghandi wasn’t killed by Pakistani nationals / He was assassinated by a Hindu radical / And Che Guevara, rebel to a U.S. continent / Was sold to the C.I.A. by Bolivian communists / Wasn’t Yitzhak Rabin murdered by a Zionist / And Anwar Sadat a victim of the same violence? / Malcolm X was seen as a threat to the F.B.I. / But to blast ‘em they used Muslims from the N.O.I. / Even the 35th President of the Republic / Was murdered by factions of his own government /
So now that it’s proven, that a soldier of Revolution / Or head of an empire, disguised in a Constitution /
Cannot escape the retribution or manipulation / Of the self-appointed rulers of the planets corporations / So Imma need every generation to put your hands up /Cause you can only get ‘em off your back when you stand up!

If you found that impressive wait till you hear the rest of the album!  My personal favorite songs off The Martyr are “Rich Man’s World (1%)”, “Civil War”, and album closer “Sign Of The Times”.  That being said it is pretty extraordinary to hear the man rapping over a sample of The Allan Parsons Project in “Eye In The Sky” as well as the main theatrical theme from The Goonies in “Goonies Never Die”.  Yes I said it.  The Goonies!  1980s culture all up in your face!

Waveriders.  Don’t delay!  Head over to www.viperrecords.com and download this FREE album right now!  If you value intelligent hip-hop you absolutely, positively need to know Immortal Technique!  Now if you’ll excuse me, after listening to this album again for review purposes I have a protest rally to start.  Don’t blame me if after listening to The Martyr you do the same.