Secrets of the Moons - Seven Bells 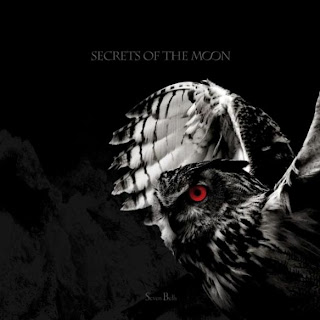 Seven tracks, seven bells . . . all chiming in tune to open the Seven Gates of Hell.

Secrets of the Moon is a black metal outfit from Germany and have been plying their demonic and brackish trade since the mid-90’s. Now calling Prophecy Productions home, these Teutonic gloomsters hit the nail on the head, albeit with my skull being the proverbial head. Seven Bells is black metal masterpiece played just the way I like it. Complex and moody, experimental when need be, heavy and sinister . . . always making me look over my shoulder coz’ the Dark Lord himself might be creeping up in tippy-toe fashion to put a hex on me.

The title track opens this album like the prelude to the apocalypse. Tolling bells, creepy and haunting guitar arpeggio . . . like shimmering harbinger notes to a great cataclysm that will inevitably crush us. All of the building tension creates a monstrous image in the mind’s eye of cityscapes enshrouded in swirling toxic mist, the burnt out husks of monolithic skyscrapers standing as markers of a greater destruction, and a constant orange glow of fire and subsequent death. The survivors are the unlucky ones as they shamble through the dust and debris, scavengers lost in time. The music grinds its way through its own volcanic intensity with chugging palm muted guitars, double bass rhythms, and tones of oppressive darkness. The vocals add a sinister menace to the song that very easily could have gone the way of campy, but no . . . the vocals are perfect. The intonation and the delivery of the vocals draw me in deeper to the darkened imagery, creating greater depth and a frightening clarity of intent. The chorus is a violent expulsion of belching fire and brimstone. The musicianship on this track is outstanding as “Seven Bells” builds and builds and builds, finally seeing the monstrous relief of tension breaking towards the end of the song as the guitars soar with a chaotic frenzy, yet jam packed with tastefully chosen notes. Sonically, just an epic song!

I read somewhere that Seven Bells was the soundtrack of Lucifer rising, and based on this first track, Secrets of the Moon captured that intent with absolute perfection. 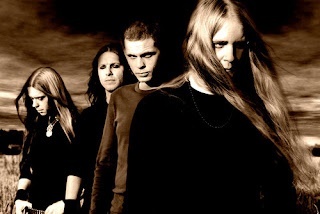 The entire album is made up of fantastic epic music, each song painting a darker shade of black upon itself. “Blood Into Wine” is rolling serenade of violence. Thrashing its way at just over five and a half minutes long, this track is the shortest beast of the bunch. But that doesn’t make it any less interesting . . . not by a long shot! Secrets of the Moon incorporate great bits of instrumentation and inject so much texture that even the most pedantic aspects of the song is incredibly fascinating.

The trio of songs bringing the album to a close are my personal favorite moments, as Secrets of the Moon explore the deepest and darkest recesses of evil, both with music and with lyric. “Worship” is nine-plus minute dirge that plods through most cavernous depressions of the mind. This tune is more of a slowed down track until we get towards the end, then the band does what I love the most . . . keep things interesting by creating dynamic shifts. In the case of “Worship”, the vocal presentation is top notch and constantly compelling, the inflections of the voice bring the lyrical message crashing home. “Nyx” is the most terrifying twelve minutes I’ve listened to in all of 2012, as the song opens with a more ambient musical passage before exploding with demonic destruction. Once the song picks up steam, the shroud of darkness lowers itself around us and utterly obliterates the light during the last few minutes of synthesized tones wash over the soundscape. The Celtic Frost-esque “The Three Beggars” emphatically closes the album. This song is everything. Heavy, fast, diabolical, intricate, layered, dynamic, and pure brilliance! It’s the perfect end to a near perfect album in that it puts a bow on our miserable existence and mercifully puts us out of our misery.

Black metal is hit or miss with me. When it’s a miss, it’s because it’s too rigid and compartmentalized. When it’s a hit, it’s because bands like Secrets of the Moon take the sonic palette laid out before them and experiment with tones and tempos, twist ideas and reshape them into the likeness that they would like to see, er . . . hear. Seven Bells breaks the mold a bit, it redefines Secrets of the Moon, but not at the expense of alienating the fans of the genre. In other words, the band holds true to the ideals of the genre, keeping themselves locked in just enough to know what you’re getting, yet pushing the boundaries of the genre by adding elements of ambiance, a crystal clear vision, and a commitment to performing at the highest level. The execution on this album is a laser guided weapon of mass destruction to the heart of society’s sensibilities. The destruction is absolute. Soundtrack to Lucifer’s rising? Yeah . . . without a doubt.