Saturna - The Kingdom of Spirit 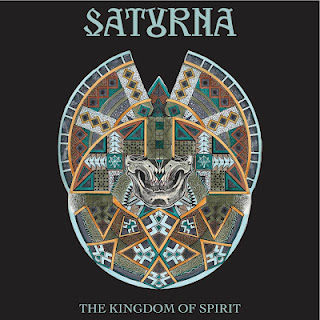 I'm packing up my truck I call the Silver Shark, and I'm heading north to the dark forest of Ontario Canada.
A space for my original muse to get fired up. A mind cleansing and shock to the habitual routine of life and work. As part of this purge, I will also pack my trusty boombox and a bottle of red wine. I will then take said boombox, and  place it,  into the forest, approximately 25 feet from my green plastic lawn chair. You need audio space my brothers and sisters. Space from the sound source, and your ears. Fuck the head phones (for now)! There is something to be said about dead windless organic air, that takes music from the speaker,  to your ears. Like a bellhop with a red velvet glove full of music,  served straight to the senses.  In this case - the sound between the space, will be Saturna cranked out of the boombox. (With only the crackling of a fire pit as a distraction.) Space is the place. And this band was made for that organic audio space.

The production on "The Kingdom of Spirit" is done superb. Not over produced like a stale chicken sandwich at the 7 Eleven. This is nicely mixed, with great organic tones and vintage sounding spacephonics. It has a warm feel. The drums sometime pan from one speaker to the other. You really need to give this record a chance. I found that this recording improves with each song. Getting more skillful with each cut. The intro to " Morning Star"   is disfigured and seductive with the vocals coming in like a super planet royal demigod. Although hard to define the sound of this band other than Euro Rock, I can hear sounds of "Message - Book of Dreams"  here. Which is a huge compliment. Not too many bands are making music like this right now. Sounds from the early 70's Euro rock, but somehow still advancing the genre.  This band calls Barcelona, Spain home ground. Give your ears and mind a workout and admire the intelligence. Check out  " The Kingdom of Spirit " by Saturna.  This is a great effort.

Stand out track - "The Hermes Stone".