Ripple LIbrary - Commando: The Autobiography of Johnny Ramone vs. I Slept with Joey Ramone: A Family Memoir 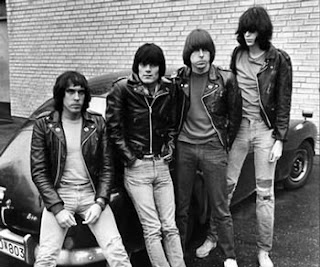 A few months ago I was flipping through a copy of New York magazine and was surprised to see they printed a chapter from the upcoming Autobiography Of Johnny Ramone. He died in 2004 and I had no idea he had ever written his life story. I've been a huge Ramones fan for over 30 years and was lucky enough to catch the band live close to 20 times throughout the 1980's. I'd read a lot about them and figured I'd heard most of the stories already so I skipped the book written by Joey Ramone's brother Mickey Leigh called I Slept with Joey Ramone: A Family Memoir that was published in 2009. But when I found out about Johnny's book I took a trip to the library and took out Mickey's book before reading Johnny's. I figured it would be good to read them back to back and see how their stories compared. 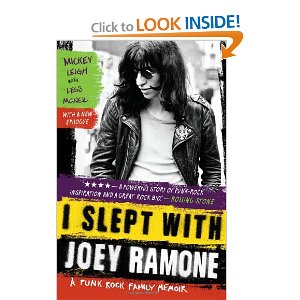 Mickey's book goes into great detail about their upbringing and how Joey was a total outcast due to his strange looks and even stranger behavior that was later diagnosed as OCD. Joey really couldn't have done anything other than be a Ramone. Something I never knew was that Mickey had played music with Johnny at some point before the Ramones started. I also had no idea that Mickey wound up marrying an ex-girlfriend of Johnny's. It's well known that Johnny's wife Linda was with Joey originally and the split caused huge problems for the band. Obviously, Johnny and Mickey's accounts of these events differ greatly. Mickey goes into way more detail on this topic than Johnny. Maybe too much, but he probably needed to get some things off his chest. The best parts of Mickey's book is when he talks about working for the band in the early days. He was a roadie for the band during the early years and gives interesting accounts of things that are well known in Ramones lore - opening for Johnny Winter in 1975, the first shows in the UK a year later and all the craziness of their early tours. I also had no idea that he sang backing vocals on the first Ramones album, notably on "Blitzkrieg Bop." Years later when the song was used for a Budweiser commercial he tried getting some money out of the band, causing a huge fall out with his brother. I Slept with Joey Ramone is a good read, but Mickey comes across a little bitter that his own music career never went anywhere and he's been stuck living in his brother's shadow.

Johnny Ramone was determined to live in no one's shadow. His book is short and to the point. Not surprising given his guitar playing and no bullshit attitude. Johnny was a total hard ass but if it wasn't for him the band would have never survived more than a year or two. Most Ramones insiders give Johnny a lot of respect but have gone on record that he was absolutely no fun at all. His book doesn't really dispute those claims at all. He talks about how much he enjoyed being angry and pissing people off. He also made sure the band worked hard and made money so they could all retire comfortably. His story of the Ramones is consistent with most of the others that have been published over the years but a few really cool stories stood out for me. I was very excited to learn that Johnny said the loudest band he ever saw was Grand Funk Railroad in the early 70's and one of the only people that ever intimidated him was James Williamson of the Stooges. Johnny's book comes in a very cool hardcover package with glossy pages and lots of excellent photos. The appendix at the end of the book contains lists of all of his favorite musicians, baseball players, movies, etc. I had no idea Leslie West was his third favorite guitarist of all time.

Both books end with chapters dealing with the cancer that took Joey and Johnny's life. Having lost a loved one recently to cancer, I wound up skipping over quite a bit of them. Having spent many months in and out of hospitals and doctor's offices I had absolutely no desire to relive any of that nightmare. Johnny and Joey never got along in life but managed to work together to create one of the greatest and most influential rock & roll bands of all time. It's so tragic that they both lost their lives to illness way too early in life. If you're a Ramones fan, you owe it to yourself to check out both these books.