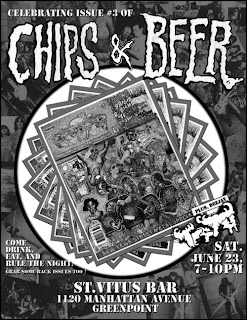 Reality has been preventing me from exploring a lot of the new music that the Ripple editors have been sending my way lately. There's a ton of cool stuff awaiting my judgement and I don't want to form opinions based on half-assed listening sessions. Something that has really caught 100% of my attention this week is the brand new issue of the metal fanzine Chips & Beer. That's right, an actual printed fanzine full of killer articles about obscure and semi-obscure metal bands that I didn't have to write myself. This is the third issue of Chips & Beer and I plan on tracking down the first two pronto.

What really caught my attention is the headline "New Yawk Street Metal Special." Anyone who's ever been around me for more than about 30 seconds knows how much I love obscure NY metal trivia and I am glad to report I learned some new tidbits to bore my friends and bandmates with. If this issue had come out a month earlier the article I wrote about Frigid Bich for the TheObelisk.net would have been much better. There's a lengthy interview with Frigid frontman Joe Leonard that answered everything I wanted to know about these ultra-obscure Long Island metal merchants. I discovered them through the almighty Kick*Ass magazine but had no idea that they were actually managed by KAM mastermind Bob Muldowney. He didn't want the band to do interviews so the image and myth would grow. He was certainly right about that!

There's a great interview with Jay Jay French of Twisted Sister that was also very informative. He gives a good synopsis of the cover band bar scene surrounding NYC (mainly Long Island/Westchester and New Jersey) and how it had absolutely no interaction with what was going on in the city with the New York Dolls, The Ramones, etc. I also did not know that Jay Jay was a Dead head in his younger days. So was Handsome Dick Manitoba, aka China Cat, of The Dictators, incidentally. Go figures. Speaking of The Dictators, guitarist Ross The Boss also gives a great interview about his heavy metal daze with Manowar. Danny Lilker of Anthrax, Nuclear Assault and S.O.D. also weighs in. Mike Schutzman, owner of the much missed metal mecca Slipped Disc Records, talks about the incredible in-store appearances he used to host for Motorhead, Slayer, Wendy O. Williams among many others. A bonus in the section of the zine are reviews of NY metal classics from the early days of Sir Lord Baltimore, Blue Oyster Cult and Kiss through Riot, The Rods, Blacklace and Overkill.

To balance things out there's a big article and interview with West Coast weirdos Cirith Ungol, a truly cult band deserving of more recognition. Below the radar current metal bands like Krypts, Ares Kingdom and Cauldron Black Ram were a complete mystery to me but they all have the right attitude and I look forward to checking out their jams. This is the best 7 bucks I've spent in a long time and with the change left over from my ten dollar bill I can go cop a tre bag at Valley Park in the Bronx! Thanks, bros!!