Mother Corona - Out of the Dust 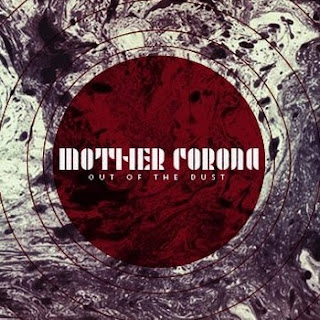 It would appear that Oxford is not just a renowned and respected seat of learning in the UK. There is far more to the place than clever fuckers walking round with floppy scarves wearing brogues with their noses in the air as underneath the gleaming city spires lurks a darker, heavier underground. In recent years the city has seen something of a renaissance in terms of heavy bands that seem to spring from the city like blood from a hit to the jugular!!! Domes Of Silence, Winnebago Deal, Desert Storm, Caravan Of Whores and Undersmile are just a few of the bands putting Oxford on the rock and roll map recently and now you can number Mother Corona among them.

Imagine a spacier more lysergically bent version of Sabbath…as if Tony and crew spent their time necking mushrooms in a forest instead of knocking back Watneys Red Barrel ale and filling their nasal cavities with cocaine and you’re on the right path. Mother Corona have been floating around the underground for a few years but it’s only with the release of this, their debut full length album that they are starting to make some serious waves. Lee Cressey’s guitar spews forth monolithic slab like riffs, David Oglesby’s drumming is tight and in the pocket bringing the groove like a young Bill ward and his vocals have that distinctly Ozzy-eque edge albeit thrown through a whole truck load of effects for good measure and finally bassist Rob Glen brings the thunder like a barbecue in the British summertime!!!

Opening track “Hedonist King” sets out the band’s stall straight away as a massive groove rolls in topped off with some nice, Hawkwind like psychedelic effects. The Sabbath approved breakdown in the mid section provides a breathtaking change of pace before the band return to a spine crushing groove once again. “Sunscope” offers more of the same as a thunderous riff, the like of which Tony Iommi has been searching for for nigh on 40 years rolls forth. Oglesby shows that he has a real knack for hitting a catchy, memorable vocal line and nailing it note perfectly. After only a couple of listens this stuff is embedding itself right in your mind…front and centre!!!

The sombre bass intro to “Sonic Tomb” may lead you to think these guys are aiming at the doom crowd but when the supercharged riff kicks in it’s clear that Mother Corona have a burning heart of rock that straddles the doom, stoner and classic rock genres with seamless ease. After being pummelled for three tracks straight the Corona guys offer a brief respite as “Cosmic Collisions” gently eases in on a delicate piece of mellow psychedelia before they unleash a riff of titanic proportions and another monstrous groove. These guys want you to nod your heads…hard!!! Once again the Sabbath comparison is never far from the table but let’s face it, if you’re going to take influence it may as well be from the best and now that Sabbath have become something of a soap opera in recent months someone needs to be there to pick up the pieces!!! Mother Corona can smell the blood and they’re getting hungry!!!

Next track “Quaalude ‘74” is an acoustic folk rock track…is it fuck, it’s another smorgasbord of heavy as fuck, down tuned riffing with a groove fatter than the Tongan royal family and a chorus line catchier than Typhoid in a Victorian slum. One of the most impressive things about Mother Corona is that they don’t try to impress with the dexterity of their playing, they’re far more concerned with writing great songs with simplistic, catchy riffs and great melodies…and that’s what this game is really about. It’s only as you listen deeper that you realise that these guys have the chops in spades to play the shit out of material 10 times as complex as this but just want to lay down a groove at crotch level and run with it!!!

Talking of crotch level, “V.A.G” seems to be a tune concerned with the disillusionment of the female race, or maybe one in particular…who knows. What I do know it represents yet another slice of prime melodic riffage that rocks out with barely restrained enthusiasm and features a scathing vocal line from Oglesby. It seems the band have more amazing riffs up their sleeve than AC/DC have been able to find in the last 10 years!!!

At last the band do give us some breathing space from the awesome riffs on the 8 plus minutes of “Nuclear Winter” which eschews the heavy for a more delicate, effected clean tone and another killer vocal line from Oglesby. This is kind of “Planet Caravan” with more beef on its bones. Its overall differentness to the other tracks certainly does make this a clear stand out, particularly with the very tasty guitar work of Cressley where he shows he has a real feel for the instrument beyond slamming out the slabs of granite!!!

Fear not though fans of the riff for it does return in spades on “Out Of The Dust” which is a potential stoner rocking anthem, imagine Sabbath playing southern rock whilst enjoying some fine acid. It may not be the most involved or attention grabbing song on the album but it’s still a damn sight better than most bands seem capable of managing. Don’t hit the stop button too quickly after this bad boy finishes though as, although it isn’t credited on the sleeve, Mother Corona bring the album to a close with a spirited and very credible version of Sabbath’s “Into The Void” which is as good as any other cover of the song as you’re likely to hear anywhere else, including Orange Goblin’s version!!!

So that’s the album, a hugely impressive offering of very fine heavy rock and if that wasn’t enough when you realise the band recorded it themselves in a garage it becomes even more remarkable as the production is as fat and weighty as you could ever wish for with that Kyuss like bottom end (in fact, as I think of it, Oglesby does bear some resemblance to John Garcia as well!!). I’d be hard pushed to pick fault with this album…possibly the guitar could be a little brighter and maybe the band do overplay the spacey effects in the mix a tad but fuck it, I’m really clutching at straws there to find any criticism. That Mother Corona have taken the leap of faith to release this album themselves and taken such time and care over every aspect of it from the music, to the production to the packaging is truly worthy or merit and respect. Do yourselves and the band a favour by checking this out and grabbing a copy!!!!