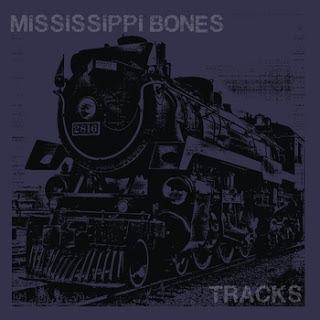 This is kick-ass. Pure and simple.

Named after an incarcerated hobo, Mississippi Bones rolled onto the underground rock scene like a freight train with hefty, southern-inspired riffs and potent vocals on their 2010 self-titled debut. Their follow-up, Tracks, has me even more convinced. The Ohio duo, Dusty Donley (guitars, bass, programming) and Jared Collins (vocals, bass, programming), play powerful tunes with toe-tapping and head-bobbing grooves, giving an extremely exciting ride all the way through.

Want huge riffage? Sure you do. Donley is a polished riff locomotive who hauls the heavy on Tracks. Love a bunch of catchy, interesting lyrics? Collins must have huge, iron lungs because he spews clouds-full, like thick vocal steam rising from a smokestack as the train chugs its way along the rails.

With the roar of an engine, the anthem "American Surreal" peels out and throws me back in my seat as Tracks leaves the station. This is one truly fantastic rock song with punishing guitars, a massive beat and a sing-along chorus. "Over the Counter Culture (Thank You Very Much, Mr. Moore)"  and "The Conspiracy Theorist" have more down-tempo, but still strong, two-ton southern grooves. "Jacurutu" and "Swamp Lady" are both covered in bass-laden, sludgy muck.

It was a little hard for me to finish the 10-track album the first day I had it, to tell you the truth. "Crushed By The Weight Of The Monolith" is a song that I started over before it was even finished and I did that countless times. I think it's the heaviest that Mississippi Bones have ever released and definitely my favorite on Tracks. It's so heavy I'd almost call it more metal than hard-rock, actually, but you can judge for yourself. At least now I know there is another level of heaviness to Mississippi Bones and it makes me love them even more than I already did.

Two dudes. It's still hard for me to believe sometimes. On Tracks, though, Donley and Collins bring along a little help from some local friends, making the music even more dynamic. Al Morris rips some tasty harmonica on the bluesy, groovy "Jade Fire", which has lyrics based on the 80's movie 'Big Trouble in Little China', and opera performer Kjira Robinson sings backup on four songs. They both do a great job.

Perhaps my favorite guest performance is by art professor Bill Mancuso, who really shreds the organ and plays a helluva solo on one of my top tunes, "Dungeon Hustle", which is about the role-playing game Dungeons & Dragons. It also pokes a little fun at the hip-hop culture at the same time. Like, when Collins sings about 'rolling twenties', he means twenty-sided dice. Not car rims. There's plenty of jabs in there and it's pretty hilarious stuff. Oh, and the song rocks, too.

Yep. It's kick-ass. Tracks has been in my cd changer for weeks and there's no sign of it leaving any time soon. Maybe until their next release.

Here are some other questions I asked Donley, if you're interested. A micro-interview:

HB: Are you in the southern part of Ohio, near Kentucky? If not, are you from the south?

DD: I'm not. We actually live in a small little college town of about 3,000 people in northwest Ohio. I think the southern edge to our music comes from two places. First, growing up, my mom always had classic rock playing in the house. She loved stuff like Skynyrd, Neil Young, Crosby Stills & Nash, The Doors, Zeppelin, Sabbath, The Stones. So, I've got that as a backbone mixing with my love of current rock/metal from the South. Crowbar, COC, Down, Suplecs, Mastodon, Baroness, Kylesa. I think all of that smashed together gives you what you hear on a Bones record...

HB: What's your musical background, before the Bones?

DD: Jared and I were both in other bands in the past. The interesting thing is that Jared played guitar in his bands and I sang. Trust me, I'm a significantly better guitar player than a singer. HA! I picked up the guitar my freshman year in college, circa 1996, thinking it would help me write lyrics for the band I was singing for. That band fell apart a few years later and I've just been writing and playing on my own ever since.

HB: Have you ever done a live show in your area, with the friends that you have on the (new) record? If not, any plans to get a drummer and do that?

DD: We've actually never played a live show. We never really had an intention to play live, but after we put out the first record, we got a ton of feedback from people all over the world saying, "WHEN ARE YOU GUYS GONNA PLAY LIVE?!," that we decided to get some guys together and do a show or two. We've been jamming with three other dudes for a couple of months and plan to play some shows this summer, but I think the live thing will always be a part-time, now and again sort of thing.

DD: Yes and no. I just gave Jared a disc that had nine new demos and I'm currently working on number 10. ..Jared, man. That guy is classic...

Let's show some love and help support Mississippi Bones while they work on putting out more material. Plus, I've heard some really heavy stuff these guys have on the back burner and believe me, you'll want to hear the songs too if and when Donley and Collins are able to record them, 'for real'.

You can get digital or physical copies of Tracks from the Mississippi Bones Bandcamp page and both of their albums are also available on Itunes. Other merch via their Facebook page. Do yourself a favor and get some.