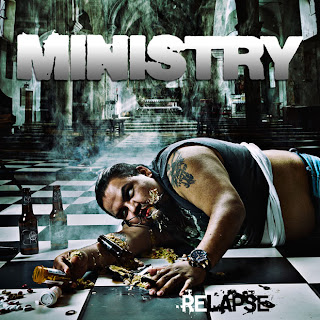 LL Cool J once famously proclaimed, “Don’t call it a comeback, cuz I ain’t never been gone”.  And I guess in truth, Ministry have never referred to this as a comeback, and certainly Al Jourgensen has never been gone.  Dead almost, in 2010, but not gone.  This album comes after a 4 year hiatus, though, and to my ears this is not your father’s Ministry.

I certainly don’t mean that in a bad way, but if you are expecting something along the lines “The Land Of Rape And Honey”, or “Psalm 69”, you will be surprised by this release.  There are songs that are almost straight up metal and songs that are pretty much straight ahead rock, and very little of the industrial craziness that endeared this band to me in the 90’s.  But it is still well done and the vitriol that we expect from Mr. Jourgensen is here in spades.

The album starts off with “Ghouldiggers”, and if you ever wanted to hear a rant against the music business and the glorification of dead artists, put this track on right away.  Almost 8 minutes long, you know exactly how Al feels about the biz after this one.    “Double Tap” rants against the perceived video game mentality of the military and its actions overseas.  Just to be clear, those are Ministry’s views, not mine.  But a couple of solid tracks to start of the proceedings.

I have to be honest, though, the rest of this album took a while to grow on me.  I’ve listened to it several times now and I can find things that really dig, but it did take a while.  Again, because of what my expectations are for a Ministry album.  I really had to wrap my head around this somewhat new direction, and then I enjoyed it.  I still think it is a little telling, though, that in my opinion, the best song on the album is a cover of S.O.D.’s “United Forces”.  The band really rips into this track and they sound like they really buy into the message.

As far as topics covered, we have “Kleptocracy” which addresses the greed of the haves in ripping off the have nots.  We’ve got “99 Percenters”, and if you can’t guess what that one is about you must have been a spider hole for the last year or so.  “Get Up Get Out N Vote” talks about the elections process in the US and how we need to clean house on Capitol Hill in the next election.  So there is no shortage of topical interest on this album.  If you are a Ministry fan simply because you like Uncle Al’s rants this release will be right up your alley.
Overall, I like this album and I would recommend it, but with the caveat that if you are expecting old school Ministry, be prepared for something new.