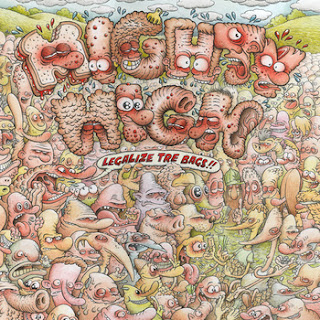 Continuing with the party that found Brooklyn's finest regressive rock act crashing the party at some of the best music sites in the world, Mighty High bring their debut album blog tour to the Ripple Effect for the premeire of the final two songs, "Chemical Warpigs" and "High on the Cross."

Don’t miss the album that Heavy Metal Time Machine says stirs “together some classic rock riffs, punk rock energy and stoner rock madness to serve up some of the catchiest rock to come down the pike in some time.”

Saturday June 30 at The Rock Shop in Brooklyn, NY    www.therockshopny.com

You can find the album at the Ripple Store and all fine physical and digital outlets.

For a review of the album, check out The Sleeping Shaman.

"Yeah I know I’m in a band on the same label as these guys but that doesn’t necessarily mean I think this bunch of lobotomised chimps are any good now does it? For the record, I do…and I did long before we were label mates right back to the birth of their previous album “In Drug City” which proved to be a raw, uncultured blast through rock and roll’s dark history whilst under the influence of a truck load of narcotics.

The band describes their sound as “Black Flag Railroad”…and that’s pretty accurate. Imagine it’s the year 1973 and Grand Funk Railroad have inadvertently discovered hardcore punk. Not wanting to fuck up their lavish rock star lifestyles they decide to find a willing group of slightly retarded, stoned teenagers and teach them to play this new sound…that band would be Mighty High…except they’re far from being teenagers and this is 2012…the rest of the description remains pretty accurate.

Kicking off with the barely-scraping-a-minute blast of “I Don’t Wanna Listen To Yes” it’s clear that, despite line-up changes this is very much business as usual for Mighty High…raw, in your face punk meets 70’s boogie rock and roll. Any song that features the line “I don’t wanna fuckin’ listen to Yes, Yes sucks, fuck you!!!” is an instant winner. From here Mighty High continue to mine their tales of drug abuse on the remaining 10 tracks. “Mooche” is a classic tale of a free loading deadbeat set to rollicking punk fuelled riffs. It’s not big…but it is surprisingly clever as Woody High displays a humour and turn of phrase in his lyrics that elevate themselves from being purely dumb, this is an intelligent level of dumbness that’s pretty hard to achieve. The High plumb their 70’s rock influences on “The Ram” which grooves on a riff that would have made Budgie proud and shows that the band, despite their image have a real eye for a well structured song. They probably won’t thank me for saying this but they are a surprisingly adept rock and roll band…maybe they can use this line in their advertising!!!"  . . . Read more at The Sleeping Shaman.

And now, here's your final two songs from Legalize Tres Bags, and since there was a technical glitch yesterday on Cosmic Lava, we'll drop those in also.