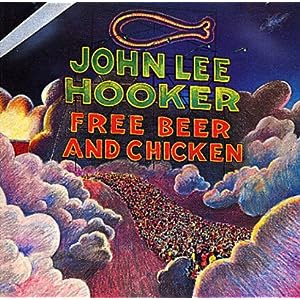 Not only is Free Beer & Chicken one of the greatest titles of all time but it is one of the funkiest things you'll ever hear. John Lee Hooker was a really funky dude. Miles Davis, a guy who knew a few things about being funky, as well as free beer and chicken, supposedly told John something like "you'd have to be buried up to your neck in mud to be any funkier." For years I had admired this album from afar. I would look at the cover on line and wonder what it sounded like. The CD's been in and out of print but I was holding out until I could find it on vinyl. The painting of thousands of people flocking towards a neon sign with the title had to be respected. A mere 5 inch square CD cover just wouldn't cut it. Now that it's been reissued on heavy weight vinyl I was finally able to get down with it the right way. I was not disappointed.

Released in 1974, Free Beer & Chicken features typical John Lee Hooker electric boogie, which is always a good thing, but has some strange twists and turns. Starting off with the self explanatory "Make It Funky," John leads the band through a nasty romp. When he yells out "make it funky!" it's not a request, it's a command. Even though it shares a title with a famous James Brown song, it doesn't sound anything like it. The blues standard "Five Long Years" gets the unique Hooker treatment and is followed by two really groovin' tracks "713 Blues" and "714 Blues." There are no mention of the famous 714 qualuudes that were so popular in the 1970's that The Godz sang about, but Joe Cocker does pop in for a vocal cameo. I'd love to know who plays the burning violin solo on "713 Blues" but there are no musician credits on the album. First pressings originally came with an insert but the info never made it to CD or this vinyl reissue. Side one concludes with a untempo revisit of John Lee's eternal "One Bourbon, One Scotch, One Beer."

Side two is where things get a little weird. "Homework" and "Bluebird" are pretty straight blues songs but "Sitting On Top Of The World" frames Hooker's deep vocals with sitars and odd sound effects. The "turned on" college kids listening to this back in 74 must have slid out of their bean bag chairs when they heard this. Then it gets stranger with "(You Never Amount to Anything If You Don't Go To) Collage (A …)." Starting off with some in-studio dialogue from John talking about how rock singers and blues singers are the same "but with a different groove" (who'd gonna argue with him?), the band launches into a heavy boogie. Producer Ed Michel strips away the band, leaving only the vocals and mixing in different backgrounds, including another cameo from Joe Cocker. I bet plenty of "party supplies" were available during the mix of this album so make sure you have enough for your own playback session.