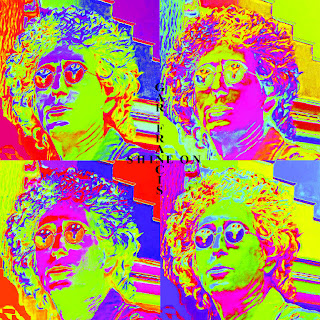 It is a scant five tracks.  The first track is the name of garage rocker Gar Francis’ new EP, “Shine On.”  That is exactly what I was prepared to do with this Bongo Boy Records release - shine it on..  However, after about a minute of the “Shine On” electronically manipulated vocals I got it.  This is old school psychedelic rock & roll written to be sync’d to the next 1970’s or 1980’s era TV show or film production.

Gar Francis looks like a cross between an early Keith Richards, Mick Taylor and Ron Wood.  It is a facade that is purposely created.  He has been playing rock music almost as long as such legends.  He began with a band in the 1960’s that played forbidden rock & roll at Catholic school graduation parties to become a mainstay of the NYC club circuit in the 1970’s as the guitarist in the warm-up band The Rockids.  By the 1980’s Francis became the guitarist in Sticky Fingers, a well-known Rolling Stones tribute band.

Despite the copycat success, Francis’ heart has always been in his own music. In the late 1980’s he formed the first incarnation of the Gar Francis Band and released a few singles.   Through the 1990’s, and into the new century, he played and wrote for a variety of acts - Oliver Wilde, The Doughboys, The Easy Outs - and even produced a few obscure albums under a pseudonym - Plainfield Slim & The Groundhawgs. His songwriting was good enough to earn him a win at the John Lennon Songwriting Contest.

The EP is full of surprising and interesting lyrics, memorable rock riffs, exacting studio production and good old classic rock overtones.  You get fluffy imagery, “clouds of pink  majestic skies” and social commentary, “baby boomers sit back and take view, graffiti masters Peter Max tattoos.”  Most of all you get great classic rock from -  “Shine On” a very bass heavy T Rex-like rocker; a nostalgic Byrds-esque folk rocker in “Back In 1985”;  a driving rockabilly and roll blues in “Blue Cadillac”; and a 1960’s ballad apparently inspired by The McCoys and the Everly Brothers in “Tragedy.”

The final track “I’m Still Alive” is an old hippies’ lament looking at things today through the rainbow glasses of the late 1960’s - early 1970’s.  It is laden with nearly a dozen identifiable guitar hooks from half a dozen well known classic rock staples.

This is not great music, but it is great fun.  Gar lets baby boomer nostalgia “Shine On.”