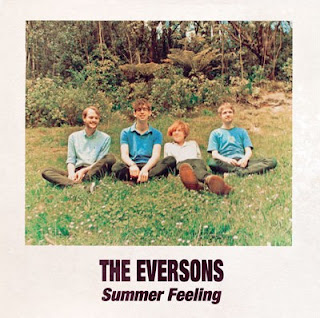 Clever, addicting and absolutely amazing, what more can I say? The Eversons are the latest band to emerge from the Southern Hemisphere that packs a punch. This New Zealand quartet blew me away from the very first time I heard their music and they feel like a band I have been enjoying for years.

As a matter of fact, they seem eerily reminiscent of their self-described role models Weezer. Much like their heroes’ debut (Weezer’s self-titled debut album a.k.a. The Blue Album), The Eversons first track knocked me out with their harmonies, guitars and catchy lyrics. Immediately I was hooked.

From first listen, The Eversons seem like the combination of Art Brut, The Beach Boys and Weezer with their over the top vocal harmonies, yet contain organic heavy guitar arrangements. Even at times lead singer Mark Turner sounds like Rives Cuomo with a cool accent. This group of good friends takes turns singing backup and lead vocals, which seems to becoming a new trend amongst younger bands alternating instrumentation and/or vocal arrangements.

Composed of Mark Turner (bass), Chris Young (guitar), Blair Everson (guitar) and Tim Shann (drums), The Eversons are sublime. Although Turner and Young primarily share lead vocals for most of Summer Feeling, Everson and Shann sing lead vocals on “Why Can’t You Just Be Happy For Me” and “You’re Just A Friend” respectively. Everything eerily seems so organic and well balanced they create a true live sound on this simply stellar debut album.

The title of The Everson’s debut Summer Feeling originates from the Jonathan Richman (of Modern Lovers) song “That Summer Feeling” off his album Jonathan Sings! Their dry wit and clever humor is perfectly captured on this multi-faceted album. “Could It Ever Get Better” is a great song to open this fun, fantastic album with Turner contemplating what life would be growing older, losing loved ones and going crazy. When the entire band readily responds, “It never gets better!” that’s when I knew this was the band for me. This brilliant, brutally honest band blew my mind away and captured my heart.

Other notable songs include “Creepy,” “Going Back to Work,” “Going Overseas,” “You’re Just A Friend,” and “Terminally Ill.” Whether they sound like Buddy Holly meets Pavement, The Virgins, Wavves or whoever, their mix of pop vocals has created a delightful debut album worth recommending and experiencing. It’s because of bands like The Eversons that I enjoy writing music reviews.