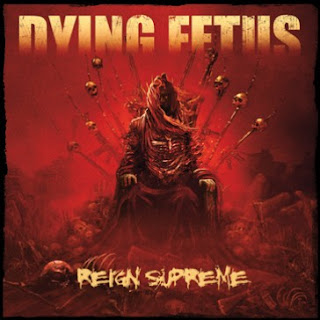 The new Dying Fetus release, Reign Supreme, is a furthering of these guys own brand of sonic punishment.

On the opening track, Inverting the Idols, the band delivers it’s famous grind, blast, sweep picking fury that brought them much earned praise and attention.

The second track, Subject to a Beating, is a perfect title for a song that absolutely crushes and might compel you to pick a subject out for a demonstration of a beating.

Breaking into the next tune, Second Skin, you can tell that these guys have really crafted a well done release and one that will only lead to more of the same. With songs like: from Womb to Waste, Dissidence, In the Trenches, Devout Atrocity, Revisionist Past and The Blood of Power, you are going to get an ear full of mind bending sound that will make you wonder how they make it and beat you up with it, all at the same time.

A must by for DF fans and those who want to be abused by their music.