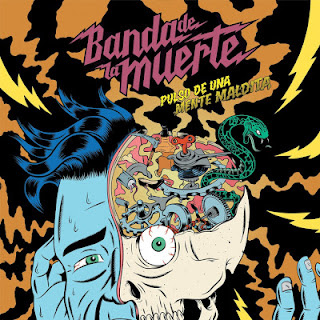 It's long been said that music is universal.

Let me be the first to add that heaviness is too.

Doesn't matter the language, hometown, or culture; one blistering mammoth-sized detuned riff followed by another, a drummer pounding the skins like Mike Tyson beating on a 5th grade bully, and a bass player laying it down so thick and low it's nearly subterranean, is heavy in any language.

Coming from Argentina, Banda de la Muerta (Band of the Dead) take stoner, metal, grunge, and a touch of hardcore and simply lay waste to the Argentinian pampas.  This is brutally heavy stuff, and brutally good.  Right off the bat, "Te Estas Dejando Mentir" brings in that perfect combination of riffing, time changes, melody and groove to weld itself directly to my frontal cortex.  Or wherever my pleasure zone is.  Staggering riffs lead us in, with some cutting guitar work for texture.  Xon's vocals are dynamically textured, roughened and guttural, like the bottle of whiskey was immediately followed by a bottle of aguardiente.   Sure, I don't know what they're singing about, my rudimentary Spanish just ain't good enough, but I know he's pissed.  That works in any language.  Simply put, this is one of my favorite heavy tracks of the year so far.

"Parte de mi Historia" simply cooks with a ferocity that can blow the dust off Patagonia.  "Part of my History" and my rough translation is a fervent pissed-off, kiss off song to an old lover.  Buzzing guitars and venomous riffs drive this one deep into my corazon.  Killer.  "El Miedo" is "The Fear" and as expected is a horror of downtuned staggering riffs, all painted in a nightmare of darkened heavy psych.  "Tiempo Muerto"  (Time to Die? or Death Time) adds a touch of perfect variety with it's gentle, Colour Haze-ish pyschedelic intro before the pounding approach of the Grim Reaper steps in with heavy plodding footsteps.

From there, the album is simply one massive roar of heavy riffing married to anger and adrenaline.  A killer release from a killer band, no matter what language they roar in.

Posted by The Ripple Effect at 1:47 PM