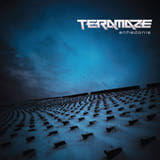 Teramaze sound like dream theater with some balls. True to thrash form they unleash plenty of staccato riffing but temper that steel with some killer vocals. Undoubtedly these guys are looking to make an impact on their scene down under in Australia.  I like it when you really have to strain to pick out the influence a band has. That, to me is a sign of a great band.

This one grabs your attention from the first riff and shakes you around like a great white shark. Tracks that stood out in my cd player were. “Machine”, “Fear of the Unknown”, and “without Red Hands”. This is a sound that combines so many of today’s new metal with the thrash classics of old. Bands like Testament come to mind as well as Nevermore.

Mick Tallent on drums and Tijon Lolis on Bass are a juggernaut. Chugging through the backline like a freight train. These two are tight and this album owes a lot to their strength. Check out title track, “Anhedonia”, and “Black Circles” to get a complete sense of their power.

Guitarists are often either pushed too far to the front or buried in the mix. Not so with this album. Perfectly matched and just simply incredible guitarists, Matthew Dawson and Dean Wells lay down a frontal assault of six string carnage. “ Black Circles” contains a screaming lead. I can’t get enough of the power of this band.

Brett Rerekua on vocals is allowed to put in some incredible runs as his band stirs up a psyclone around him. He rises above the chaos and screams, sings, growls, and serenades your ears like a banshee gone wild.  He makes you sing along with their infectious and progressive sounding tunes.

I was not expecting the wall of sound that melted out of my speakers on this one. Just a great album with some killer production.  Find this album wherever and however you can and buy it. Then buy another one and pass it on to your best friend (yes this album is that good).