The Single Life - 7" of Fun: Featuring My Plastic Sun

A while back I espoused my love for the late '80's purveyors of darkened psychedelia, The Jet Black Berries. When that band crawled out from their earthen grave and unleashed a total surprise of an album Postmodern Ghosts, I was taken by for a ride by my ear drums, kicking and screaming back down into that abyss of horrorscope pop that the JBB's did so well.

Well, the band is on hiatus right now, but that didn't stop the boys from keeping on keeping on.  Turns out that drummer Roy Stein and singer Johnny Cummings have been busy with their latest project My Plastic Sun who've just debuted their newest single, "Silicon Junkie" and damn if my ears aren't taking me for a ride again.  Big and fleshy, there's still some trappings of psych here, but now it's all wrapped up and buffed in a clear coat of modern pop sensibilities.  And damn if it doesn't cook.  Johnny's voice is smooth as melted butter as he pours over the song, textured guitars wail and undulate, Roy pounds out some polyrhythmic bashings, and the bass plows right into my brain.  Toss in an earworm of a choral hook and we got a chugging winner here.  Seriously, put these guys out on tour with Ripple band, Sky Parade and we're set for a shoegazing, electro pop party.  Cool song that rocks and grooves.  Nice job, boys.  Looking forward to hearing more. 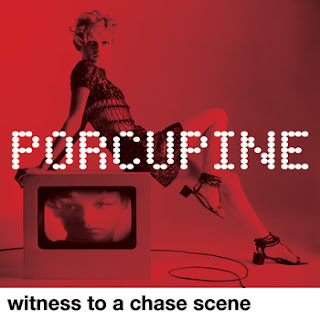 Porcupine - Witness to a Chase Scene

A while back I wrote about the fun Porcupine/Metal Ghost split 7".  Now my favorite indie, dream pop shoegazers are back with a 3 song 7" that simply smokes.  "Witness to a Chase Scene" percolates out all revved up late-60's spy film cool with it's Peter Gunn guitar licks and low-down feel that just takes over at the 19 second mark.  Way cool.  It doesn't take long for the boys to mix it up, bringing in some of their hallmark alt-psychelic pop.  A tiny touch of emo?  All good.  "Evil Twin" brings back the more math rock-y aspects of the band but is no less accessible, and "Dare to Jump" jumps right back into the more angular paths without ever losing it's ability to chug along at a head-bopping pace.  Another winner.

Buy the 7" from Porcupine's bandcamp and you'll get your choice of vinyl/cover color combination: red cover/white vinyl, orange cover/clear vinyl, green cover/black vinyl, or heck, just buy the 7" triple box set and get all three.

There's a new southern bluesy classic riffing band in town and they go by the name of Dead Weight, and their music is anything but.  Big guitars with sizzling lead riffs, big blues-based chugging, and vocals soulful enough to raise this unit above the pack.  "Cosmic Lunch" is everything you'd hope for from a song with that title.  Tasty morsels of psychedelic guitars searing and tearing through the classic riffs.  And the fine treats don't stop there.  I have no idea what a "Gannymead" is but the song cooks along like a freight train, chugging off into southern blues rock nirvana.   "Lady" slows things down enough for a classic-styled power ballad just long enough for "Stone Frog" lives up to the bands claim that they play voodoo reefer rock.

Check em out.  Any band that lists Led Zeppelin, Red Fang, Baroness, Down, Pride and Glory, and Pabst Blue Ribbon as influences is a band right up our alley.