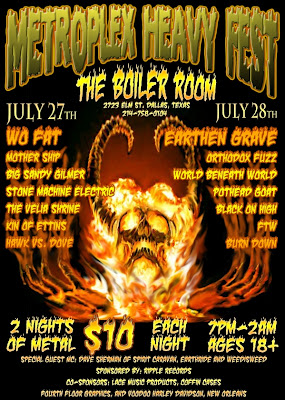 Ripple Music and Big Dude Productions are proud to announce that the California-based hard rock record label will be sponsoring the first annual 2012 Metroplex Heavy Fest in Dallas, Tx. on July 27th & 28th, 2012! The festival will be held at The Boiler Room, owned by Steve Benton of Drowning Pool, and will celebrate some of the regions hardest and heaviest acts, including special headlining preformances from Wo-Fat and Earthen Grave (featuring members of doom legends, Trouble). The event will be hosted by Dave Sherman (Spirit Caravan/Earthride/WeedisWeed) and will feature raffles, live recordings of the performances, and special guest appearances.

"To be approached by Big Dude Productions to be a part of this event was somewhat surrreal," states John Rancik and Todd Severin of Ripple Music. "We love heavy music. We love supporting heavy music. We love the guys who create the music and have the hard stuff running through their veins. What better way to give back to the scene than get involved and help keep it vibrant and alive?"

The 2012 Metroplex Heavy Fest
With special MC for both nights
Dave Sherman of Spirit Caravan, Earthride and WeedisWeed

The showcase of talent that ranges from Doom, to Stoner, to Sludge, but is all heavy!!!

www.ripple-music.com
Posted by The Ripple Effect at 8:10 PM