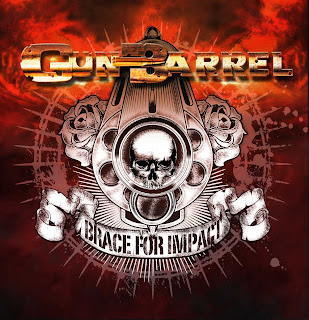 
Usually I like to listen to a new album by jumping to the middle. Most bands will flood the first four tracks with the best songs and fill the back end with some filler or not so good tunes. So much to my surprise with Gun Barrel when I shot into “Diamonds And Bullets” I got a smattering of 70’s ish new wave of heavy metal mixed with modern production values. This was a great opening to this band. I was not disappointed with the rest of the album. “Brace for Impact” indeed.

This disc is full of more energy and hooks than a Japanese reactor meltdown. Every song is a tribute to intensity and raw rocking sensibility. Everything is louder than everything else at exactly the right moment. Finally I’m hearing some ripping but classy guitar solos. This guy knows how to reel it all in and then how to turn it loose. Some guys in this genre only know how to rip and not how to feel. Rolf knows how to feel his solos out and how to unleash with both barrels when it is needed. Very impressed with this guy and I’m not easily swayed when it comes to guitar playing.

Fans of Dio and Saxon will find a home looking down the sights of this Gun Barrel. There is something else. A taste of almost southern rock metal….is that a term? I’m hearing it though. Like an added spice to the flavor. I like it. It’s good.

These are seasoned musicians who have honed their craft well. A razor tight outfit with hints of several bands melting into a molten slug that once fired, creates a hole in your musical brain that cannot be stopped by armor. This is the disc to have in your car or truck or airplane….at all times. Once again a killer band with only one guitarist. I like that. It’s the sound of metal in its rawest form. Silver on vocals is amazing. The range and power this guy has is nothing short of rock God, and yet there is an earthbound quality to it. Tomcat and toni lay down some impressive backup. Well actually if you listen to this cd they do more than that. Often overlooked in a solid band, the drums and bass are key components and here, here are two musicians who stand their ground and lay a barrage of riffs beneath the flashy guitar and soaring vocals. I’m thinking new accept here. They have that sound. That killer instinct.


Ammo for guns is important and this band knows when to stop and reload. Like an overheated machine gun in a zombie apocalypse, this band keeps firing off round after round of explosive tipped hits. A well made and well-seasoned band that knows its strengths and exploits it. I find myself singing along and driving at faster and faster speeds. It never really stops the intensity. I like this band. Very well crafted production and some killer lyrics.

So get the entire catalog from this band. There are several albums and try, try, try to see them live. How about these guys, accept, primal fear, and sonata artica for a world tour. It is in my car, on my ipod, and in my xbox. That’s right; I’m playing call of duty with Gun Barrel in the background!
Play it loud and proud.