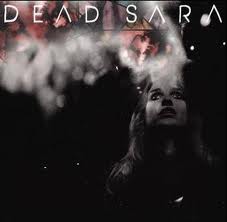 In the world of rock n' roll, there's a lot of crappy bands, a few good bands, and fewer great bands. However, every now and then there's those bands that come along where you listen to them and immediately go, "They've got it!" That phrase right there is hard to describe. It's something within the music, something genuine, something that just clicks. When I first heard Dead Sara's EP The Airport Sessions, I immediately said that very very phrase to myself - "They've got it!"

Now that Dead Sara has released their first self-titled full length album, it's been a breakout year for the band. They have just made a featured slot on the Warped Tour and will be touring with The Used across the USA. Last year, they opened for Bush, and they are riding high with their first single, "Weatherman," a hard rockin' song that's been gaining a lot of buzz for the band.

Fronted by the versatile vocals of Emily Armstrong, whose range can handle blues, soul, as well as unleash a gritty rock n' roll howl full of intensity. Besides Armstrong's amazing vocals, the electrifying band is also driven by Siouxsie Medley's guitar playing, a no non-sense style that blends melodic and heavy riffs into a perfect cocktail of hard rock.

Not to take away from the other members of the band. After all, a band is a cohesive unit. Either the chemistry is there or it's not. Bassist Chris Null and drummer Sean Friday also add to the electrifying dynamic of this band with their straight-forward style. Dead Sara is a tight band that knows how to write damn good songs, whether they're straight up rockers or heartfelt ballads. This album has intensity yet diversity as well. It's far from a boring one-dimensional album.

The albums opening song Whispers And Ashes eases you into the album. It's more of melodic song and has a hint of a U2 vibe. The song is extremely well-written, and a bit of a departure from the sound off their EP.

One of the stand out tracks on Dead Sara's new release is We Are What You Say,  an up-tempo song with a massive hook that's just undeniably - catchy. The song is no slouch, however. It rocks, and I think this song should've been the album's first single, as opposed to Weatherman.

Monumental Holiday is another fast-paced rocker that just has one of those great riffs that's reminiscent of the 90s grunge/punk sound. I can see this song on a soundtrack to an action film. The movie that comes to mind? This tune is perfect for another Crank flick.

Test My Patience is another great song that rocks good and proper, but the great thing about Dead Sara is the genuine emotions they capture in their songs. The three ballads - Dear Love, Face to Face, and Sorry For It All are extremely soul full. It's on these songs, you can really hear Emily Armstrongs amazing singing chops as well as lyrical writing talent.

Though Dear Love could very well be the album's hit song on the lighter side, Sorry For It All is by far the most heartfelt. Although I prefer their original version with just guitar and vocals, the new album's version is an interesting take on the song.

I've been waiting a long time for their album to come out. As I've said countless of times to people, Dead Sara is going to be a huge band in mainstream rock, and there's a reason for that. Don't believe me? Just take a listen. You can find Dead Sara on the Warped Tour and on the road with The Used!

Posted by The Ripple Effect at 1:37 AM