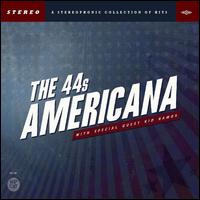 Last year I reviewed Boogie Disease by The 44s,  a tight Southern California blues band  Read my review and you will see I was infected with the Boogie Disease and the illness is terminal.

The 44s have followed up Boogie Disease with Americana, a thirteen track album produced by blues guitarist extraordinaire (who also appears on many of the tracks) Kid Ramos. The band also brought in musician Ron Dziubla to play horns. Dziubla is a music savant having played with everyone from Duane Eddy to Ok Go.

Without a doubt Americana builds upon and exceeds Boogie Disease.  Americana contains fantastic renditions of the legendary Willie Dixon’s You’ll Be Mine and bluesmaster Howlin’ Wolf’s Mr. Highway Man.  The 44s’ interpretations may, in fact, surpass the original recordings.  The remainder of the tracks were written by The 44s, except Hanging Tree and Pleading My Case which were written by The 44s and Kid Ramos.

Each track is raw, emotional, gritty and explosive.  The original blues songs of The 44s and Kid Ramos are as compelling as those of the blues legends. The band and its sound are exacting.  The torch of blues royalty burns in each phrase, verse, chorus and solo. A life of struggle and pain oozes from Johnny Main’s voice.

Americana is a well chosen mix of West Coast and Chicago blues with just a touch of rockabilly.  On each track there is something down to earth and magical - Tex Nakamura knocking out a moving mouth harp solo, Kid Ramos shredding a slide guitar, Johnny Main’s pleading vocals. On the CD cover it says “A Stereophonic Collection Of Hits” and that’s not puffery.  If you love the blues, or have that boogie disease, your collection will not be complete without Americana.

Kid Ramos with The 44s

Embed code:
Posted by The Ripple Effect at 12:30 AM

The Best Raw Blues Band around!! If you get a chance to see them do it!!! Johnny Main is Just a bad azz MoFo on The Guitar and Vocals.