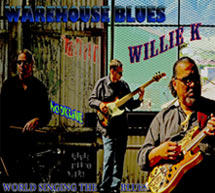 When you think of the Blues you think of Clarksdale, MS; Memphis, TN; St. Louis, MO; Chicago, IL or even Austin, TX.  How ‘bout Wailuku, HI?

Willie K and band come to us from the land of Aloha - not some grungy Old South sharecropper village on the wrong side of the tracks or hardscrabble ghetto on the south or east side.  Bodda you? Shouldn’t, Willie K is da kine! He play blues; he play Hawaiian, he play jazz.  He even do opera.

He call in da bruddahs on dis one.  Jerry Byers he play bass; Kris Thomas be drummin; Mio “Timbolero” Flores be addin’ percussion; Tam Sugayam hit da Congas; and special guests Avi Ronen be playin’ guitar on da track Nasty Thing; Sam Ahia, Sr. do jazz guitar on da track Lonely Man: and Howard Eisenberg he be addin’ sax.  It be onolisicious!  Da tunes just at home at the House Of Blues in Chicago, Austin or Memphis as at Kimo’s in Lahaina.  There be delta blues, Chicago electric blues, Texas blues.  It be planny ono stuff.

Posted by The Ripple Effect at 1:04 AM