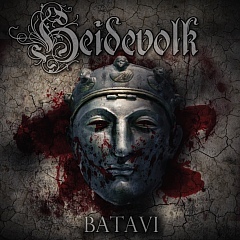 I stood staring out the open door, watching the earth move 15,000 feet below me.

I'd taken many a dive before, so I had no reason to be anxious, but as the wind belted my face, I couldn't help but think something was about to go terribly wrong. Fastening the earbuds into my ears, I hit my iPod and the Pagan Folk Metal of Dutch band, Heidevolk, burst into my ears.  It seemed like the perfect accompaniment to my jump.   Swallowing my fear, I leaped from the plane, flinging myself into the vastness of the early morning sky.  The air buffeted my cheeks, icy daggers of pain digging into my face as if a butcher were filleting my face with tiny scalpels.  Adrenaline seared though me, but not in the sense of the normal rush.  It was the fear of the unknown.

Lightning cracked.  A vortex swirled around me, a maelstrom of darkened clouds and stinging rain.  Thunder resounded within the whirlpool of whipping clouds and ice particles.   The Earth disappeared.  My body descended into nothingness.

Then, just as quickly as the vortex arrived, it was gone.  I was on the earth, unharmed, yet I hadn't ever deployed my chute.  How was that possible?  And where was I?  The darkened forest around me was a far cry from the windswept, brown grassy fields of my landing zone.  Rain fell about me.  I crawled onto my knees in the mud.

Then, they were there. 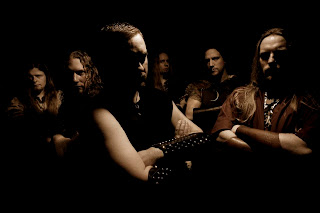 I saw them before I heard them.  Pounding drums and chants of a long-lost time.   A time of dark ages and lost Germanic tribes.  Terror seized my heart as the foliage parted and out they stepped.   The Batavi.  Yes, I know they existed over a thousand years ago when they dared to rise up and fight against the oppression of the Roman Empire.  But there they were.  In single file formation.  Battle armaments at the ready.  The regiment began chanting in unison "Een Nieuw Begin."   I don't know how they had electric guitars, but they did, and they crushed out one brutal metallic riff after another, searing up and around the melody of the chorus and back into the group chant.  I should have been terrified, but I wasn't.  The Batavi didn't want to harm me.  They knew I wasn't from a lost Roman Legion.  No . . . they wanted me to join them.

We marched back to their village and the feast began.  In the main hall, mead and ale poured like a sexual fluids as the guitar whipped into the melodic lines that rode over the staggering metal riff of  "De Toekomst Lonkt."   Paired clean vocals rose above the fray of rousing metal guitars, leading the men into the hall, ushering them forward to celebrate the upcoming battle.  And the men did.  Rushing in amid a tempo change and perfect thrash riff, they gathered and chanted in unison.  I don't know what they were singing, some Germanic dialect, but I was totally wrapped with them.  Mead flagons held aloft.  A God was going to bless them that night and the men planned to meet that God drunk off their asses.

We feasted on boar and deer, tearing the meet from the animals bones with our teeth, juices dripping down our chins, as a funeral mall fell over the group.  The dirge of "Het Verbond Met Rome" settled over the large room, walls of guitar screaming and echoing as if in mirror of the dying that would happen tomorrow.  The reality of our situation settled in.  We were about to face the world's mightiest army--the mere few of us.  But we weren't going to falter.  Picking up the mead flagons we jumped upon the table as the crushing thrash riff picked up the tempo.  Another group chant.  Another rousing metallic riff.  A brotherly slap to the warrior besides me.  If I was to die, these would be the men I would meet my maker with.

"Wapenbroeders"  brought us to the frenzy.  Crushing blast beats accompanied by the mournful wail of a violin filled the air as we lined up single file, grabbing our weapons.  A battleaxe in my right hand, I grabbed a metallic mace in my left.  I steadied the shield that protected my left forearm and pulled the helmet down over my bald scalp.   Our leader called out to us as the cacophony broke into a raging guitar riff.  "Hey" we screamed back in time with the band.  Battleaxe raised.  "Hey!" 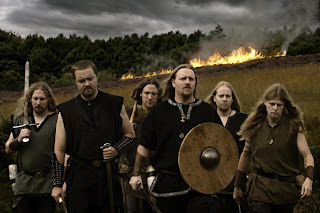 Adrenaline speeding through our veins and the taste of blood lust in our mouths, we marched through the village to the raging metal of "In Het Woud Gezworen."  The women stepped out of the earthen huts, babies draped on their hips.  Then it was time for a moments reflection.  A lone violin stepped in above a delicately strummed acoustic guitar as we took the two minutes of the mournfully beautiful "Veleda" to say our goodbyes.   Tears stained their cheeks and even the bravest man felt the knot grow in their throats as the reality of our eventual battle set in.  Not many of us would return to our homes, but fight we must.  For freedom.  For our children.

And fight we did.  To the hyper-intense death scream blitzkrieg of "Als De Dood Weer Naar Ons Lacht" and on through the thrash metal assault of "Einde der Zege" we fought.  Limbs rendered from torso.  Heads split open under the crushing might of my mace.  I defended my brothers, fighting for my new adopted land.  Blood splayed, flesh tore.  The band played on in furious thrash metal as the lone violinist joined in, lending her mournful gaze to the bloodshed.

And then, as quickly as it had started, it was over.  "Vrijgevochten" rang out, a lone guitar scratching out a metal riff, soon accompanied by the full band and the rousing gang vocals of us survivors.  We rose above the dead, our arms locked with each other.  We raised our voices to the Gods, giving thanks for our victory and remembering the brave deaths of our fallen comrades.  As sweet as victory is, the muted metal of "Vrijgevochten" reminds us that nothing comes without a cost.  We gather up our dead and wounded and head back to the village.  Women and mead await.

As for me, I have no desire to go home.  I'm one of the Heidevolk now.  I live with the Batavi.  Romans beware.