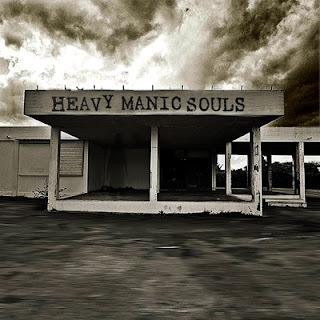 Ladies and Gents, wave riders of all ages, Welcome to the venue.  Are you ready to rock?  I said, ARE YOU READY TO ROCK!.  . . .  There, that’s more like it.   Here is your performance guide,

Heavy Manic Souls, a four-man band, originally formed in France in September 2009, by guitar god, singer, writer and band founder Chris Francheteau, also known as Chris Rolling (don’t ask why), that also includes skins player Rod Chaillou;  heavy-bottomed bassist Eric Robin; and blues vocal master Eric Dufour. Unfortunately, the band in this form is no longer around and it is now a two-piece band which, when you hear the album, I believe you will find to be an absolute tragedy.

To what will we be listening?

Heavy Manic Souls’ self-titled album.  The album was made in five days.  It was mainly recorded live with overdubbed solos and vocals and mastered at Pigsound Studios in Los Angeles.  It consists of the following tracks:


What type of music will we hear?

Where can we hear it and buy it?
http://www.heavymanicsouls.com/

So, without further ado, we bring you Heavy Manic Souls.  Smoke ‘em if you got ‘em.