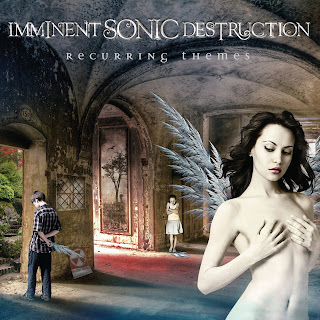 Imminent Sonic Destruction.  When you read a band name like that, it makes you think twice before you open the file and start listening.  I mean, what if the band name is literal?  What if you start listening and unleash destruction upon the planet?

Thankfully, that didn’t happen.  In fact, there isn’t much about this release that would lead you to think of destruction at all.  Not that it is all pretty music or anything like that.  But I’ve heard music that makes you think that the end of the world is like, right now.

This release reminds me a lot of Devin Townsend Project stuff.  There are some real prog touches in here, mixed with some heavier, metal type music, and some flat out death metal vocals at times.  There are some very interesting juxtapositions of pretty synth parts with raging metal guitars, blasting double bass drum and the aforementioned death metal vocals.  Things that you don’t normally hear in a metal release, but then, that’s what makes an album like this standout.  This isn’t cookie cutter stuff that sounds like everything else.

Imminent Sonic Destruction is a project of Detroit based guitarist and vocalist Tony Piccoli.  He has recruited various other Detroit musicians to form this band and put out this release.  Most of these guys have a pedigree in prog styles, along with some metal, and it helps create some really good music.  This is the kind of album that rewards you with multiple listens, but even from the first listen you get pulled in by the melodic hooks.  There are some crazy time changes that keep you on your toes, and some very interesting songs that really keep your attention.

My favorites on the album are “Monster” and “Sick”.  Both are just awesome examples of how to put a variety of metal styles together in ways that just work.  And the lyrics to “Sick” will stick with you; there is definitely some weight to the subject matter in that one.  Overall, there are some shorter songs, although nothing shorter than 5 minutes, and a few really long ones, and the shorter songs seem to work a little better for me.  I’m still trying to decide if prog is really my thing and the longer songs have a lot of different passages that just don’t grab me as much as the shorter ones.  But to each his own, and the album overall still works very well.

If you dig Devin Townsend, Meshuggah, or Dream Theater, or wished all 3 of them would just do a mash up album, then you will think your prayers have been answered with this release.  Put it on, chill out, and enjoy!