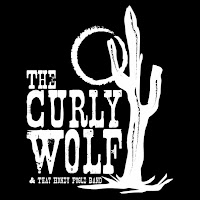 Waveriders do I have a treat for you today!  Several months ago I reviewed an album entitled In Your Image by the band Einvera.  I love that album.  It is filled with imaginative, folk tinged metal compositions featuring wild instrumentation and top shelf musicianship.  In fact, In Your Image is so good it easily made my top ten list for 2011!  Thus, when I found out about a new side project from one of the three core members of Einvera I immediately got excited.  Furthermore, reading that this was a “Western/Cow-punk” project featuring “some pissed off banjo action” literally caused me to start fidgeting with anticipation!
This is only a rough estimate but I’d guess that it only took about five to ten seconds of the song “Cause For Concern” to reel me in hook, line, and sinker.  Wow, talk about a direct shot of audio adrenaline!  The Curly Wolf is a traditional country western band considering their instrumentation.  You have Grant Benziger’s banjo and vocals out front being supported by guitar, upright bass, drums, and the occasional fiddle (the other band members names are Matt Pliskin, Etta Stewart, and Chris Stewart).  With “Cause For Concern” the Western/Cow-punk description is spot on.   This song is a high octane, punk-flavored affair played with the aforementioned country western instruments, and featuring melodic vocals with more bite than a bear trap!  Stellar!  But wait, there’s more!
Of the three other songs, “Live Cursed” is closest to “Cause For Concern”.  The band sets their tempo to hyper speed and lets loose.  In comparison to “Cause…” however, this song has much more of a metal feel.  The vocals loose some of their snarl in exchange for heavier melodicism, the banjo and bass become more of a rhythmic entity helping the drums to power the song forward, and electric slide guitar adds memorable little flourishes throughout.  “Suite 203” brings the tempo down, but the band’s attitude is not lost in the process.  In fact, this song has such an infectious swagger that it produces involuntary muscle spasms in the form of rhythmic toe tapping and knee slapping.  “One Thing At A Time” wraps up the proceedings.  To me this song is all about musical sleight of hand.  For the most part it is a beautiful ballad-like song featuring elegant banjo lines and soothing female backing vocals, but regularly the full band will kick in and the intensity ratchets right up.  I love it!
To wrap up, if you want to hear a new band with an incredibly interesting approach The Curly Wolf & That Honey Fogle Band is for you.  They’re country, they’re punk, and they’re rock and roll.  The bottom line is they are too good to miss!  Live Cursed, Seen Worse has been (or will soon be) released by Heavyocity Records.  Go forth and listen waveriders.
Listen Here- http://www.facebook.com/thecurlywolf
Buy Here- http://heavyocityrecords.com/ 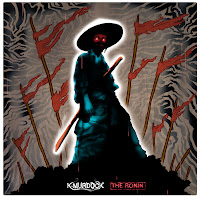 K-Murdock  The Ronin EP
All right!  Who wants to hear some fantastic, feel good hip-hop music?  Hip-hop that puts a wide smile on your face, makes your head bob up and down, and encourages you to close your eyes for casual contemplation.  Awww yeah.  That’s what I’m talking about!  Well waveriders, I know just where to direct your eager ears.  It just so happens that one of my favorite producers recently released a seven song EP overflowing with musical goodness.  That producer’s name is K-Murdock and I’d like to introduce you to The Ronin EP.
I don’t mean to exaggerate but K-Murdock is one prolific producer.  He creates and releases a lot of music, whether we are referring to his own productions or remixes of other people’s work.  The only problem with his high level of output is that every once in a while Mr. Murdock will create a song that doesn’t fit with the overall feel of whatever project he is currently working on.  The Ronin EP collects seven of these masterless songs and releases them into the wild.  I find it kind of astounding that these seven songs, recorded separately over the last three years and featuring different rappers, comes off as a coherent package.  Honestly I shouldn’t be that surprised however.  Every one of K-Murdock’s releases is uniformly excellent.  Every…single…one.
When I attempt to describe the overall sound of a K-Murdock production I inevitably falter.  Words like effervescent, ethereal, and engaging come to mind.  His songs simply sound jubilant!  These sublimely orchestrated compositions press all of the correct buttons and flip all the right switches.  The listener can’t help but have their spirits lifted.  Couple that with the fantastic progressive rappers that K-Murdock chooses to work with and we have a perennial winner!
All seven songs on The Ronin EP are great.  There is no weak link, but I do have a few favorites.  Opener “Carnival” featuring an emcee named Braille is utterly captivating!  The song’s synth-driven introduction exudes warmth like a furnace, and Braille’s dexterous delivery never loses steam.  What a tremendous opening salvo!  Another up-tempo number called “The Wu-tang Joint” featuring Mr. Miranda has more bounce than a SuperBall thanks to the song’s vintage horn samples and propulsive bass line.  It also doesn’t hurt that Mr. Miranda drops a killer lyrical verse.  Lastly, the laid back EP closer “The Future” featuring Junclassic falls squarely under the ethereal descriptor I mentioned before.  I love Junclassic’s highly conscious lyrics and the delicate, refined music perfectly wraps up the musical proceedings .
Waveriders, thanks to the wonders of K-Murdock’s Bandcamp page you can listen to this entire EP.  Once you’ve discovered that everything I’ve reported on is true you can obtain this gem for as little as $5 digitally, or you can spend $9.99 for the CD.  I bought the CD so that I could obtain the instrumentals for all seven tracks.  I recommend that you all do the same.  Happy listening!
--Penfold
Listen and Buy Here- http://neosonix.bandcamp.com/album/the-ronin
album review free album free download K-Murdock live cursed seen worse ep The Curly Wolf the ronin ep zip