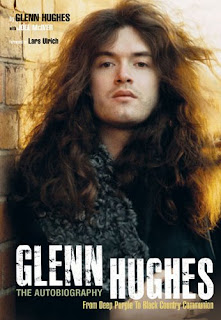 Glenn Hughes HATES cocaine, but he LOOOOOVES the smell of it. Poor guy is playing bass and singing his ass off in a band called Trapeze during the early 1970's when he gets recruited to join Deep fuckin Purple in 1973 and help revitalize the band with vocalist David Coverdale. They create a monster album called Burn and go on to have major success space truckin around the globe. They play an insane show at the California Jam festival that literally set the stage on fire. But behind the scenes, young Glenn develops a taste for the high life. Mainly A LOT of coke. LOTS and LOTS of coke. How he's still alive to tell his story in this new autobiography is completely amazing, let alone be able to function as a human being and go to the toilet all by himself.

You don't have to be a fan of Deep Purple or any of Glenn's music to enjoy this book. If you want to know what it was really like back in heavy rock's golden age you need to read it pronto. There are so many sleazy, sordid tales that your mind will reel. Canoodling with Bowie, out-snorting Ron Wood, and being accused of loving chocolate bars more than his bass by Gary Moore is just the start. There are coked out trysts with Angie Bowie, Cherie Currie and maybe even Sharon Arden (later Ozzy's old lady). Then there's the usual 70's girlfriend swapping and switcheroo. His story telling isn't pornographic but gives you enough innuendo to get the drift. Later on when the drug use gets really out of control he has no problem admitting to soiling his kimono and puking up a hot dog into his hands on a commercial flight. Pretty glamorous, eh? Read Cheetah Chrome's autobiography if you want to hear how gross it is to be a low budget drug addict. At least Glenn had some big money a few times in his life.

There's music, too. After all, the Mk.III and IV line ups of Deep Purple were pretty incredible. You get the inside stories behind how a lot of the songs were written and recorded. For an out of control coke fiend Glenn has kept himself pretty busy over the years playing with everyone from Tony Iommi to the KLF. Personally, I would have loved a bit more technical data. What the hell were those ungodly large speaker cabinets he used to use to deafen people with back then? How massive was the PA system they would rattle stadiums with? How the hell did they move it from one place to another? What's he playing through these days? Maybe that will be revealed in his next book. The other thing he doesn't really mention is having the same name as the leather dude in the Village People.

Glenn's been clean for awhile now and his career is on a definite upswing. His new band with guitarist Joe Bonamossa is a success and he's playing and singing great. He's skinny as a rail but very healthy looking and determined to kick ass for a long time. As the Cove would say "God bless yer!"

Thanks for posting - I didn't know Glenn had a book out - loved his work with Black Sabbath on Seventh Star & with Purple. I will check this out.
Regards
Steve
www.everyrecordtellsastory.com