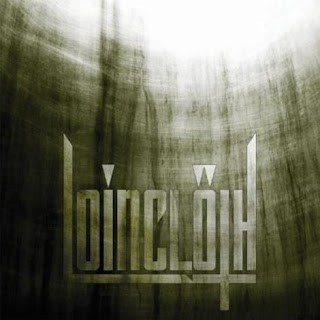 Only one month into the year and I already have my #1 album of 2012. What's a heavy music fan to do? Enjoy it for the rest of my life, that's what.

The first time I heard a riff-laden Iron Balls Of Steel, the full-length debut by LOINCLOTH, I was streaming it on the computer, and not too long after that the vinyl was spinning in my record player and the album cover was in my hands. That might have been the quickest music purchase I ever made. In fact, I know it was. I ordered the record online almost a month before it was released.

I've really liked a lot of music coming from Southern Lord Records, but the problem is: I haven't cared for a lot of the vocals. Well, the Lord answered my prayers on January 17 and my problem's been solved. Seriously heavy riffs - no fucking vocals. Yeah, you know how I love that instrumental stuff.

This is 16 tracks and nearly 40 minutes of pure bone-jarring riffage. There's no pretty acoustic guitars. No dreamy intros or fancy solos. I said pure riffage and I meant it. Quick, start-stop riffs you swore were just there. Lumbering riffs that kinda linger in the air. On this record, chugging riffs are everywhere. You'd better have Iron Balls Of Steel cause you're gonna get kicked in the junk when you listen to it.

Former members of North Carolina's death/doom outfit Confessor, Steve Shelton (drums) and Cary Rowells (bass), have joined up with Virginia's man of many riffs, Tannon Penland, to create one of the most unique heavy albums I've heard in a very long time. This is one of my favorite metal releases in maybe 10 years or more. I love it that much.

About: "The idea behind the formation of riff-mangling instrumental/progressive act, LOINCLOTH, was to create a band that focused only on the things that made the members' favorite form of music inspiring and powerful, steering clear of cliché formulas, and choosing instead to carve its name out sheer force of will. Punishing riffs and a mean rhythm section were all they were interested in...To them, metal was getting punched in the face by sinister riffs while a tight rhythm section kicked them with counter-beats to the gut!"

Iron Balls Of Steel is raw and stripped down to it's... well...LOINCLOTH. (Gasp) It's ter-RIFF-ic metal for all the people like me who want nothing more than to rock the fuck out and not listen to a growling, groaning or wailing singer while I'm doing it. I don't need no stinking vocals.

I asked Penland if there were ever any plans to have a singer on this record.

"No, the plan from the beginning was to create something that focused on abstract rhythmical spaces with no interference from vocals or guitar leads," he said. "We had thought about bringing in a singer as a guest to possibly do a cover. I strangely, have never played a cover song (in any of my bands-present or former). We just didn't have time to do it. It would be interesting to hear a singer in context of Loincloth. I would imagine it would be pretty fucking frustrating for a lot of people to attempt."

Could you describe your music in your own words?

Penland: "Loincloth is a difficult beast to describe. At the root it is quite primitive It celebrates the metal we love in a rather abstract way. How to kaleidoscopically explore a singular riff through its endless rhythmical possibilities and keep it HEAVY was our goal. As a singular tag, I really don't know? 'Steve Shelton Metal'? haha..."

He has a particular fondness for the dummer, no respect to the bass-player, however. "It was a joy to make this record. Steve and I were are able to create not only what we wanted to hear, but something that we wanted to communicate to a larger dialogue in metal. For me it is particularly special because I have always been a 'drum nut' and Steve is my favorite drummer on the planet. To play with Shelton was a true gift every time I walked into the practice space."

As much as I love this album, the chances seeing the band in person in the near future seem to be slim and none.

"I do wish we could take this record out live, but it is a virtually impossible task at the moment. We live in different states and the other guys have pretty rock-solid work schedules. Also, for Loincloth to sound "right" live we would need a second guitar player and we don't have one of those."

Too bad. I'd love to see and hear them play live. I'll just have to stick with my vinyl and hope I don't wear it out any time soon. I suppose my digital copy is always an option.

I'm not gonna try to compare this record to anything else because I don't think I've heard anything quite like it. To me, it's is a one-of-a-kind metal masterpiece and I won't soon forget the day I got it in the mail and placed it gingerly on the turntable. The only thing that would make it better: if it would have come with an actual loincloth. I gotta get me one of those now, and I'll rock out with my cock (almost) out. Best band name of the year for me, too. Maybe ever.

LOINCLOTH. Fuck yes. I can pretty much guarantee that I won't like anything more than Iron Balls Of Steel this year. Guess I'll keep looking for the rest of my top-10.

*footnote: I love this record so much that I personally made these videos (with permission) so you could hear LOINCLOTH for yourself.